The TransPacific Partnership (TPP) has finally been signed, in Auckland, the remotest big city in the world, chosen in part because New Zealand first proposed the agreement more than a decade ago. It may also have to do with the city’s distance from the swarms of people likely to protest.

The deal brings together 12 Pacific Rim countries in a landmark agreement that lowers barriers to trade and sets new standards on everything from labor and environmental regulation to intellectual property. The objective, as US President Barack Obama has said, is to not ”let countries like China write the rules of the global economy.”  Yet, the deal could significantly increases the economies of some participating countries, while barely impacting others, as Quartz has previously reported.

Even though the TPP has been signed by the member countries, it could be another two years before it comes into force, as individual country governments ratify it at home. And that could still be a bit of a problem.

In the US, for instance, a bill needs to be passed by Congress before the agreement is adopted. Already, it has been resoundingly criticized from an unlikely group of allies, including America’s employment unions, Nobel Prize winning economist Joseph Stiglitz, and Republican candidate Donald Trump.

Here are their gripes:

Stiglitz called the TPP, which could be more than 6,000 pages in length, “the worst trade agreement in decades” in an op-ed in The Guardian, because it gives corporations too much power. In particular, it:

…gives foreign investors the right to sue governments in private international tribunals when they believe government regulations contravene the TPP’s terms (inscribed on more than 6,000 pages)…While the language is complex – inviting costly lawsuits pitting powerful corporations against poorly financed governments – even regulations protecting the planet from greenhouse gas emissions are vulnerable. The only regulations that appear safe are those involving cigarettes.

Trump called the TPP a “horrible deal, one “designed for China to come in, as they always do, through the back door and totally take advantage of everyone,” at a debate last November. He added, somewhat confusingly:

If you look at the way China and India and almost everybody takes advantage of the United States — China in particular, because they’re so good. It’s the No. 1 abuser of this country. And if you look at the way they take advantage, it’s through currency manipulation. It’s not even discussed in the almost 6,000-page agreement.

Trump clarified later that he was fully aware that China is not part of the agreement, he meant that the country would “get their way in later,” but didn’t elaborate.

America’s unions are upset because they’re worried the deal could cut even more US jobs, after the NAFTA gutted an estimated 850,000 from the country. That’s a fair concern, given the much lower manufacturing wages in most signatory countries: 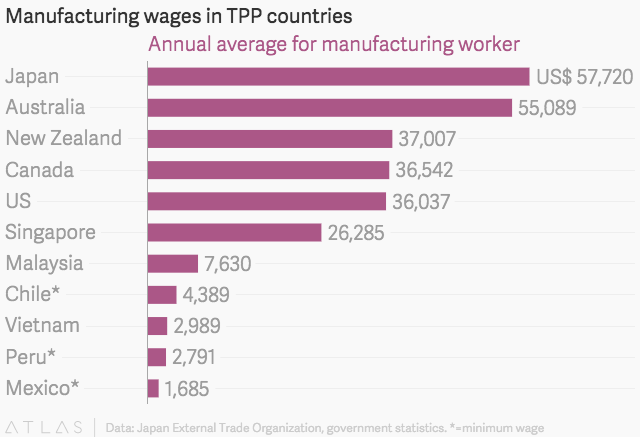 Also, the participating countries don’t have great reputation for respecting labor rights, as the UFCW, a food workers union, explains:

Vietnam does not allow for the organization of independent labor unions and recognizes only those affiliated with the ruling communist party. The country also subjects tens of thousands of drug offenders to forced labor through what it calls “labor therapy.”