LinkedIn’s stock is plummeting in after-hours trading on a decidedly poor outlook for the start of 2016. The company beat earnings and revenue estimates for the fourth quarter of 2015, but it forecast revenue of $820 million for the next three-month period—well short of the roughly $870 million that analysts were expecting. Suffice it to say, Wall Street isn’t pleased. 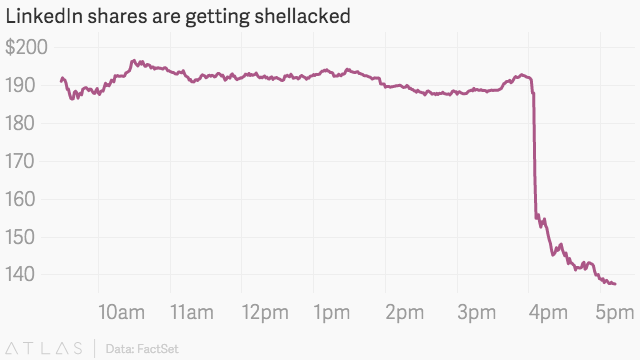 The post-results plunge is becoming an all-too familiar story for LinkedIn. Last April, the stock collapsed 20% after LinkedIn slashed its outlook for that year’s second quarter, despite revenue that beat estimates and earnings that finished in-line.

Forecasts aside, it’s tough to say what exactly is ailing LinkedIn, but one possibility is that it simply has too much going on. LinkedIn is a recruiting service in the guise of a social network. About 60% of its revenue comes from “Talent Solutions,” a recruiting and hiring platform, but it also offers a hodgepodge of other professional services with impressively jargony names. These include “sponsored updates” (native ads), “lead accelerator” (a lead generation tool), plain old display ads, and LinkedIn Premium (an enhanced subscription service).

A lot of those things aren’t going so well for LinkedIn. Rates on display ads, not surprisingly, are down. Lead accelerator, which only launched a year ago, will be phased out. And while Talent Solutions grew as a share of revenue in the latest quarter, LinkedIn chief financial officer Steve Sordello told investors that the “rate of add-ons and renewals decreased moderately year-over-year.”

This might explain why LinkedIn says its plan for 2016 is to simplify and consolidate. “Our strategy in 2016 will increasingly focus on a narrower set of high value, high impact initiatives with the goal of strengthening and driving leverage across our entire portfolio of businesses,” LinkedIn CEO Jeff Weiner said in prepared remarks. “Our roadmap will be supported by greater emphasis on simplicity, prioritization, and ultimate ROI and investment impact.”

Maybe next quarter, simplicity will extend to its investor statements as well.