As China rang in the year of the monkey, its internet giants were vying for the attention of smartphone owners.

For the third year in a row, popular messaging app WeChat launched a “red envelope” scheme that allows users to gift random amounts of money to one another. For example, a person might offer up 10 RMB (about US$1.50) total in cash and distribute it at random to a selected number of friends. Some friends might win bigger than others, leading to grins and cringes all around.

The scheme originated in 2014 as WeChat’s attempt to lure users on to its mobile payment system, WeChat Payments. It was wildly successful, leading tens of millions of smartphone owners to attach their bank cards to the app—thereby opening the door for purchasing rides, meals, and other goods on WeChat.

Since then, gifting digital red envelopes has become a tradition. According to Tencent, WeChat’s parent company, users sent more than 8 billion red envelopes to one another by the end of February 8th. That marks an eight-fold increase from the year prior. 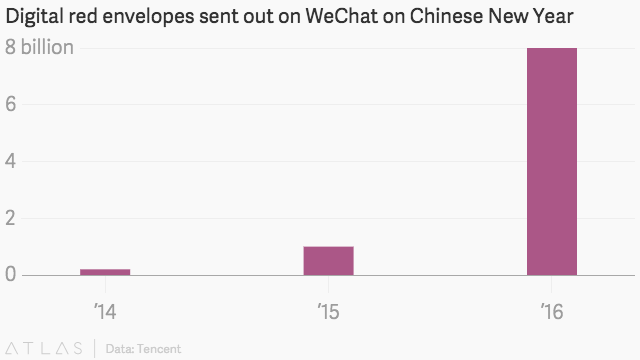 E-commerce giant Alibaba has tried to imitate the scheme but has not achieved the same success as its competitor. Last year it launched a red envelope scheme of its own, in an attempt to popularize a messaging app that competed with WeChat. The company hasn’t disclosed the number of envelopes sent out by the eve of the holiday this year. This year it partnered with CCTV for help with promotion. The network broadcasts the annual CCTV Spring Festival Gala, which reached about 700 million viewers last year. In 2015, users of Alipay Wallet, Alibaba’s mobile payment app, sent out 240 million red envelopes compared to WeChat’s 1 billion.

Baidu, China’s answer to Google, has also gotten in on the scheme. Between January 28 and February 8, users of Baidu’s mobile payment app sent a total of 4.6 million red envelopes, according to TechCrunch.

The marketing required to launch these promotions is not inexpensive—Alibaba has reportedly spent 269 million RMB (about US$40 million) to secure its partnership with CCTV (link in Chinese). But Alibaba and Tencent are willing to pony up the money to in order to keep their payment services competitive. Two years after the first red envelopes scheme, WeChat Payments now has 200 million users as of November. That’s about two-thirds of Alipay’s user count—and plenty enough to keep it on its toes.