With the yen down 25% since the beginning of 2013, Japan has become an increasingly popular destination. Inbound tourism reached a record 19.7 million people in 2015, nearly twice what it was in 2013, with a quarter of that total coming from mainland China, according to the Japan National Tourism Organization (JNTO).

China’s economy may be slowing, but Chinese tourist arrivals in Japan are not, and this holiday week is especially busy. “According to tour operators, there is no indication of fewer visitors from China during this Lunar New Year holiday,” JNTO researcher Minako Aoshima told Quartz. In fact, the bookings are even larger than last year, she said.

The “explosive shopping sprees” the Chinese have become known for, though, have been toned down somewhat, Aoshima said. “Some [Chinese visitors] have said that their money is going more to something for themselves instead of 10 rice cookers for their neighbors,” she said. 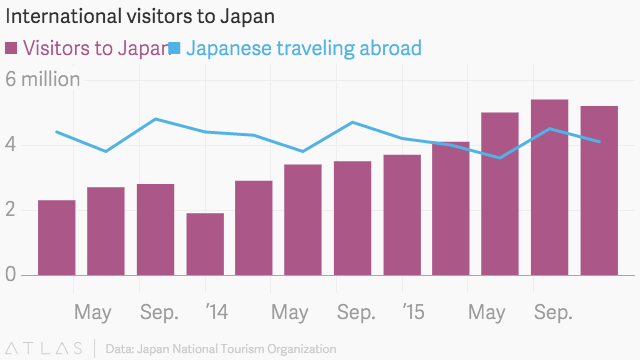 The tourists arriving this week threaten to gum up a tourism infrastructure that is still struggling with what to do with recent innovations like Airbnb. Foreign tourists spent $1 billion during the last Lunar New Year in Tokyo, Osaka, and Kyoto alone.

“Problems are surfacing in what may be called bottlenecks in hotels, tour buses, and certified guides” in the major cities, Kazuaki Maruo, president of Nippon Travel Agency, told the Japan Association of Travel Agents (JATA) in August.

Now the Japanese government is trying to shoo international visitors to less-traveled areas. Its website suggests that visitors interested in buying one of those high-tech toilet seats visit the Toto toilet museum in southern Japan. For those less interested in plumbing, there’s the bucolic splendor of Shizuoka prefecture or the Lake Biwa Birdman competition:

Cruises around Kyushu and the Okinawa islands in southern Japan tripled in 2015 because of visitors from Hong Kong. Now they are being  marketed to mainland Chinese, Aoshima said. Chinese are also visiting smaller villages in Hokkaido, Niigata, Tokushima, and other areas outside the “Golden Triangle” of Tokyo, Kyoto, and Osaka.

Catering to the guests, though, is hitting the hosts.

The weak yen had made overseas travel too expensive for many Japanese. The Japanese who can travel are increasingly heading to the hills to beat the influx of foreigners driving up competition in the traditional tourist areas. Hokuriku, a relatively remote region 300 miles west of Tokyo and across the Japanese Alps, has seen a surge of domestic tourists in the past few years, JATA data shows.

Hiro, a driver for a Kyoto-based chauffeured tour company, has already noticed the difference. Brushing up on his English during a break from his normal 10-hour driving day, he said work has been increasing with all the inbound travel. His company is hiring 50 people fresh out of college to help show tourists around Kyoto and is focusing on drivers who can speak foreign languages, including the hiring of a Chinese driver and chauffeurs who can speak Korean.