The “browser war” that swept desktops in America ended in the mid-2000s. But in China it’s alive and well, and now spreading as far as west Norway.

On Wednesday (Feb. 10), Oslo’s Opera, which makes browsers for PCs and mobile devices, announced it had received a purchase offer of NOK 10.5 billion (USD 1.2 billion) from a group of Chinese companies. The potential buyers include Kunlun, which recently acquired gay dating app Grindr, and Qihoo 360, which has tools in search and security for mobile and desktop.

Rumors of a sale first circulated in August 2015, following a lowered earnings forecast for the fiscal year. Since late 2013, revenues have grown but profits have remained flat. 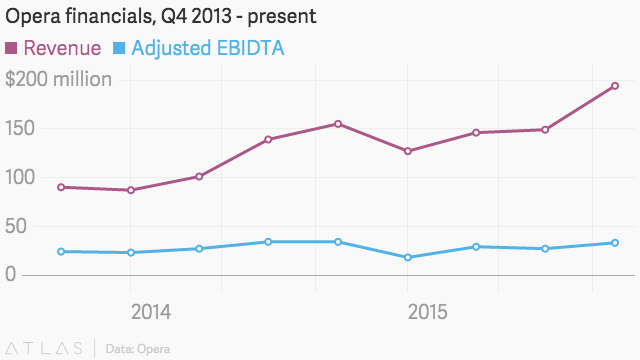 Chinese investments in or acquisitions of foreign tech companies can sometimes seem unexpected. But Opera has long been acquisition bait for China’s internet giants.

Baidu, Alibaba, Qihoo, and other Chinese tech companies are kings in their home markets. But outside of China, where Google and Facebook are easily accessible, they face stiffer competition. As publicly listed companies, attracting more eyeballs is necessary to grow revenues and please investors. So they’ve recently begun betting on boring utility apps as their path to capturing foreign users.

Cheetah Mobile, for example, is a spinoff of Kingsoft, a software firm founded in 1989 best known in China as makers of a Microsoft Office competitor. After listing on the NYSE in 2014, the company aggressively targeted foreign markets to promote Clean Master—an app that claims to remove junk files from phones—as well as a battery booster, a browser, and a keyboard app. To date, Cheetah Mobile trails only Google and Facebook as the world’s largest Android publisher, and it claims 50% of its users are outside of China.

Chinese internet companies like Baidu, Qihoo, and Apus have pursued a similar strategy, launching browsers, flashlight apps, and security products for smartphones. All of these companies just want to attract eyeballs—even if it’s just to boring apps—and turn that attention into advertising revenue.

Opera has a lot in common with the Chinese utility app makers. Its smartphone browsers, particularly Opera Mini, are designed to appeal to users in poor countries like India, where cheap Android phones are ubiquitous and consumers are price sensitive, CEO Lars Boilesen re-iterated in the company’s most recent earnings call (link to video). Opera Mini has become popular with consumers by compressing data and allowing pages to load quickly and less expensively than other browsers. To date, it has over 100 million users.

William Bao Bean, an investor at venture capital firm SOS Ventures, tells Quartz that buying opera would give Kunlun and Qihoo “much greater reach.” “The browser is a trojan horse for control of the smartphone,” he says. If Chinese internet companies can’t develop their own products to win over consumers abroad, purchasing popular ones is a fallback option.