A spike in microcephaly cases in Brazil—and its potential links to the Zika virus—has spurred a global public health emergency, prompted calls for women to postpone pregnancy in some countries, and inspired new guidelines about how to have sex in the US.

It’s now looking like the problem may have been overstated—or at the very least, misunderstood.

Data from Brazil’s health ministry suggests that the number of children born with microcephaly, or a smaller-than-normal head and brain, may be lower than originally reported. Separately, a study by Brazilian researchers shows that the prevalence of microcephaly was likely higher in the years preceding the Zika outbreak.

The exact number of microcephaly cases in Brazil—and elsewhere—is hard to pin down. There are various definitions for the condition, which is initially diagnosed by measuring an infant’s head. Extensive investigation is usually needed to determine whether a smaller-than-average head is the result of an underdeveloped or injured brain, or simply due to a family or ethnic-group trait. That can require a slew of tests, such as MRI scans and DNA tests, Janet Soul, director of the Fetal-Neonatal Neurology Program at Boston Children’s Hospital, tells Quartz.

In Brazil, officials instead draw a hard line at 32cm (12.6 inches, link in Portuguese, p. 24), regardless of gender. Separately, the Pan American Health Organization recently issued guidelines (link in Spanish, p. 5) based on a definition of microcephaly for head circumferences of less than 31.6cm for girls, and 32cm for boys.

What’s more, the charts used to determine the “average” also vary. The WHO and the US Centers for Disease Control and Prevention, or CDC, have their own versions. There are also the InterGrowth standards, which are based on an international study funded by the Bill and Melinda Gates Foundation.

Can’t manage what you can’t measure

These diverging criteria make microcephaly hard to track. In the US, for example, the National Birth Defects Prevention Network (NBDPN) stopped monitoring microcephaly in 2014 because of the lack of uniformity in the state data on which it relied, according to Marlene Anderka, its president. Its latest information, from 2006-2010, points to 800 to 4,800 affected babies out of about four million born every year. (Anderka tells Quartz that the NBDPN and the CDC are working to come up with a common microcephaly definition.)

Another study, published by the American Academy of Neurology in 2009, puts diagnosed cases much higher, at 25,000 a year. Its lead author, Stephen Ashwal, declined to comment for this story.

If doctors appear to overreport microcephaly cases amid increased awareness of Zika, data suggests they underreported it before.

In Brazil, initial reports suggested a massive increase in the number of children born with microcephaly, with reported cases shooting up to more than 3,000 in 2015, from around 160 cases per year in the past. But of the roughly 1,200 cases investigated by Brazilian public health officials so far, only around 460 (link in Portuguese), or 38%, turned out to be microcephaly, according to Brazil’s health ministry. The Zika virus was present in 41 of those children, or around one in 10.

If doctors appear to be overreporting microcephaly cases amid increased awareness of Zika and its potential consequences, data suggests that they underreported it before, when the virus was not as well known. An analysis of 16,208 babies born between 2012 and 2015 in Paraíba, one of the states hardest hit by Zika, found that rather than suddenly jumping, the incidence of microcephaly has ebbed and flowed with the seasons. According to the study, which was performed by researchers at the state’s health department and published by the WHO, the condition was actually more common in 2014 than last year: 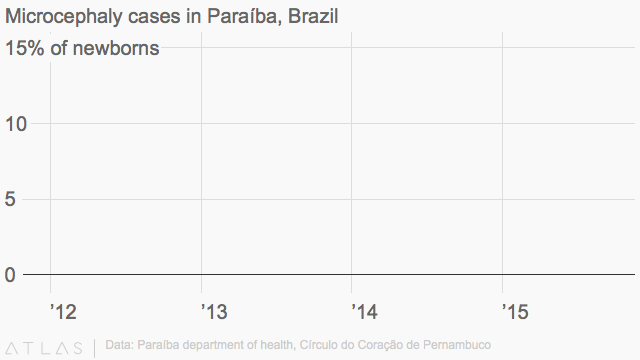 In light of all the unanswered questions around Zika, it’s becoming more important—and urgent—to agree on common measurements. Using different screening criteria can lead to vastly different results, as illustrated by an analysis by researchers at various Brazilian universities. According to their estimates, published on Feb. 5 in medical journal The Lancet, the number of annual suspected cases of microcephaly ranges from 3,000 to more than 600,000, depending on the method used:

To avoid confusion, the authors recommend that authorities use “a consistent set of diagnostic criteria,” and that they hold off from publicly reporting cases until they’ve had a chance to confirm them. On Friday (Feb. 12), WHO officials said they are weeks away from figuring out whether Zika is linked to microcephaly, a possibility they believe is becoming more and more likely.

In the end, regardless of the selected definition, a lot more digging will be required to answer the most crucial question: What is causing microcephaly in Brazil?

“This is something that we’re not going to sort out overnight,” says Soul from Boston Children’s Hospital. “It’s going to take a lot of detailed testing to wrap this whole story together.”