Nobody seems to know where the US economy is going.

In recent weeks, stock, bond and commodities markets have signaled rising risks of recession, and industrial numbers looked feeble, even as updates on the health of the all-important US consumer sector remain sturdy.

The divergent data highlight key questions facing the US:

Can the US shrug off the slowdown of China and other economic powerhouses?

Is the sharp decline in the US energy and industrial sectors big enough to pull the rest of the economy down with it?

Are consumers able to pick up the slack to keep the economy growing?

Well, the US has been in a similar position before, just about 30 years ago.

Back in 1986, oil prices were in the midst of an epic collapse, after Saudi Arabia essentially set off a price war aimed at preserving and boosting the Kingdom’s share of the global oil market.

That’s not too far off from the plunge we’ve seen in oil prices over the last couple years. Prices for benchmark crude have tumbled in the neighborhood of 70% since the end of 2013.

Moreover, the Asian exporting behemoth of the time, Japan, had started to slow. (Japan’s growth in 1986 turned out to be the slowest in a dozen years.)

The historical echo of 1986 offers an opportunity for those of us eager to understand where the US economy goes from here.

Here’s what happened back then. And some thoughts about what we can expect this time.

Oil made an impact

Like today, the sharp decline in oil prices most obviously hammered the energy sector. Investment in the oil and gas sector dried up fast.

Jobs quickly vaporized, with employment in oil and gas extraction shrinking by roughly 150,000 jobs in 1986 alone.

Of course there was some spillover. Energy-centric cities such as Houston suffered big housing busts as people left town, and declining prices prompted homeowners to walk-away from homes worth far less than their mortgage.

A front page article from the Wall Street Journal in early 1987 spotlighted Houston’s ”suburban slums.” Meanwhile, the oil patch as a whole went through a rather severe regional recession.

Slower growth, but no recession

But while the oil bust hammered some regions, the US as a whole never slipped into a recession. 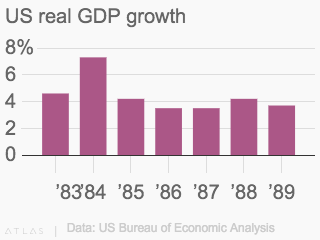 Consumer spending did most of the heavy lifting during the mid-1980s as American behavior went through a major transformation.

Since the Great Depression, Americans had been massive savers. But that essentially changed in the 1980s. Americans stopped saving, and opted for spending, en masse.

That spending was fueled by consumer debt, which soared as Reagan-era deregulation opened up access to new forms of borrowing such as credit cards. As a result, household debt loads shot sharply higher during the mid-1980s.

American consumers weren’t the only players in the US economy that underwent a transformation.

Under President Ronald Reagan, the US federal government began running large deficits in order to pay for booming defense spending as well the tax cuts of 1981.

The tax overhaul of 1986 curtailed some of these deficits by raising revenue, but that didn’t take effect until 1987. Meanwhile, the deficit in 1986 was roughly 5% of GDP, amounting to a sizable fiscal fillip for the economy.

No US deficit was bigger until 2009, when the government intervened to offset the Great Recession.

In 1986, the US dollar had slid sharply against other major global currencies, as booming US fiscal and trade deficits under Reagan made global investors—already concerned about a return of the inflationary trends of the 1970s—leery of holding the greenback.

It’s true that the weak dollar didn’t ignite an export boom. But, all else equal, it helped the industrial economy weather the slowdown.

Meanwhile, the Federal Reserve, increasingly worried about slow growth and less concerned about a recurrence of inflation, had taken to cutting short-term interest rates, offering the economy a bit of a tailwind.

That was then, this is now

It’s heartening to see that the US went through a similar traumatic oil bust in the mid-1980s and continued to power forward.

But that doesn’t mean continued economic growth will automatically be the case this time around.

Some things are very different. For example, the federal government isn’t providing as much of a boost to the economy. (The US federal deficit last year was only 2.5% of GDP, compared to 5% in 1986.)

And while the Fed was easing back in the mid-1980s, Janet Yellen’s Federal Reserve has seemed intent on lifting interest rates, keeping the dollar at some of the highest levels in recent memory.

That could change, though. A decidedly dovish turn in the tone from the Fed in recent days—along with some decent economic data—has buoyed the stock market, weakened the dollar, and reversed some of the rush to the safety of US government bonds.

It’s a very small sample size, but a shift in those directions is certainly possible. The experience of 1986 shows that the US can endure a bust in its oil and gas sector, regional recessions and a global slowdown. But it also shows that policy makers have to work the levers pretty hard to make sure the expansion continues.