Bernie Sanders is making some rosy promises for the US economy if he is elected president, based on proposals that have almost no support from Democratic economists and have been dismissed as “fairy dust” by Paul Krugman.

The Vermont senator’s plan to overhaul the US economy in the spirit of social democracy “cannot be supported by the economic evidence,” according to a group of former White House economists.

As a campaign issue, it hardly matters to the Vermont senator’s political revolution, but the disagreement sheds light on a very important debate about the future of advanced economies like the US—can they grow again, and how quickly?

The controversial projections (pdf) behind Sanders’ plan, by economist Gerald Friedman of the University of Massachusetts-Amherst, rely on the conviction that massive fiscal spending can be a huge growth engine.

Quartz talked to Friedman about three of his major assumptions, on growth rates, employment rates, and income.

This kind of sustained growth for a developed economy is unprecedented in recent history. When Jeb Bush argued his plan would push growth above 4%, we were skeptical: 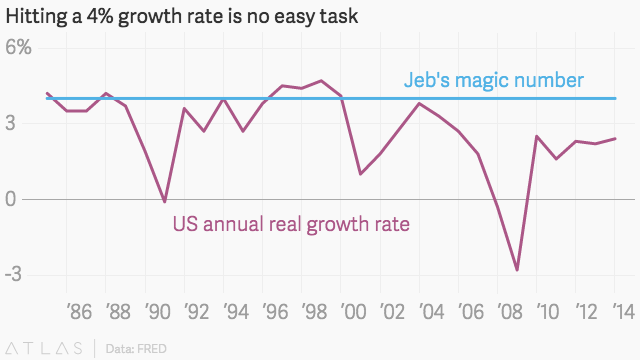 But Friedman says that along with his critics, he believes that a significant amount of government spending can create economic growth, and that his model uses fairly similar assumptions to the models used for president Barack Obama’s stimulus plan in 2009.

Setting aside arguments about whether the Federal Reserve would allow such high growth, the key to this assumption is the “fiscal multiplier”—the best guess at how much government spending on something like new roads would boost the economy by making travel times shorter or enabling a construction worker buy a new car.

Friedman totted up all of Sanders spending’ programs, including single-payer healthcare and free public university, and began with a fairly high multiplier of 2.0 that steadily reduced along with slack in economic production.

Estimates for the appropriate fiscal multiplier vary, going as high as 2.5 (PDF) , but they vary widely depending on the type of spending. The highest multiplier by the White House economic advisers Christina Romer, one of Friedman’s critics,  was 1.5.

Friedman says he did not have sufficient resources to separate out the spending by function. But the bulk of Sanders’ spending programs come as the government assumes the responsibility of paying for health care. That would mean more spending by the government, but not necessarily more spending in the economy, suggesting a multiplier much smaller than 2.0. That’s one sign Friedman’s growth projections may be overstated.

This would be a higher employment-population ratio than the US has ever seen: 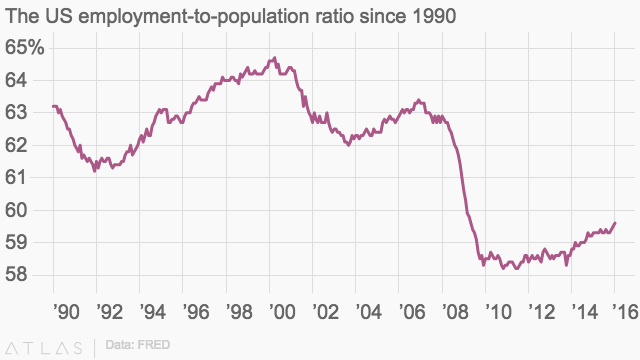 The Congressional Budget Office expects the rate to fall to 57% in the same period. What’s the difference? Mostly demographics. The government beancounters project an aging workforce (pdf) that will grow much more slowly in the future, as the US population growth rate decreases.

Friedman, on the other hand, thinks the bigger reason for lower workforce participation is the lack of demand in the economy since the 2008 recession, citing studies like this one.

This right here is the big point of departure between Friedman and his mainstream critics. Both see a big dent in the economy after the recession, but where Friedman argues that Sanders’ spending program will create enough growth to bring everyone back into the labor market.

His critics, on the other hand, believe that the opportunity has come and gone: Without up-to-date skills and networks, these workers won’t be drafted back into the economy fast enough to make up for demographic losses.

“I think it must be that this counsel of despair that we can’t do better, because we haven’t done better that last 15 years,” Friedman says.

Sanders’ college plans could help re-train workers (or not) and family leave plans could boost female participation in the workforce—a policy that has to be regarded as low-hanging fruit for US officials. And Friedman thinks that old people will work longer as health standards improve.

Even then, it is hard to believe that US workforce participation will hit a new high-water mark even as as the share of the US population over 65 will grow from 14.5% to almost 20%. 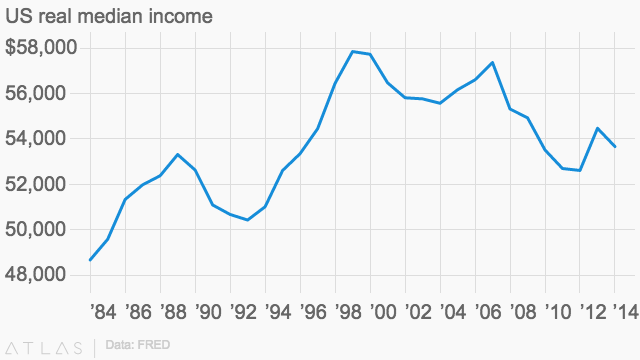 Three-quarters of this hoped-for increase is a function of the high-growth economy Friedman promises with Sanders in the White House. The rest is attributed to higher minimum wages, more generous social security, and more collective bargaining by workers.

Crucially, that’s a pre-tax figure, and what will remain after-tax under the Sanders tax regime is still anyone’s guess. His critics note that he still hasn’t spelled out the details of his proposed progressive tax rates, and whether they will fall on the middle class. His boosters argue that health care and education costs will fall, as much of their cost is borne by new taxes on the wealthy.

Where does growth really come from?

With so much riding on Friedman’s and Sanders’ assumption that the economy will generate higher wages, it’s worth noting that some of the biggest assumptions here—and in most economic models—are how exactly the US will actually generate economic expansion.

Skeptics say that the productivity growth expected by Friedman’s estimates—which are far higher than others forecasters expect—won’t be borne out. Theorists on both the left and right argue that technology and productivity simply aren’t advancing quickly enough to enable this kind of growth.

Friedman expects that demand will boost productivity on its own, with an analogy to cashiers at Whole Foods—they are more productive workers at busier times when more people are in line. This is similar to Uber’s explanation of how fare cuts mean more money for drivers: More demand for their services means more riders per hour and thus more money.

That lurking specter of the new economy is yet another concern about Sanders’ plans to raise wages: With so much of his plan based on taxing employment and raising minimum wages, the incentive to use automation may mean provide new pressure on wages and the struggling middle class—even if the hoped-for growth materializes.