Economic slowdown or not, there’s one simple reason why smartphone makers like Apple and Samsung are so heavily invested in China.

The country saw the biggest shift in desktop to mobile computing in 2015, according to a new report released today (Feb. 23) from Adobe analyzing mobile use in 26 countries.

Overall, 35% of all website visits in China originated from a mobile device, a 50% increase from the year prior. When excluding tablets—the use of which has faltered in recent years and declined 3.7% in China in 2015—the share of smartphone visits actually rose 65%. 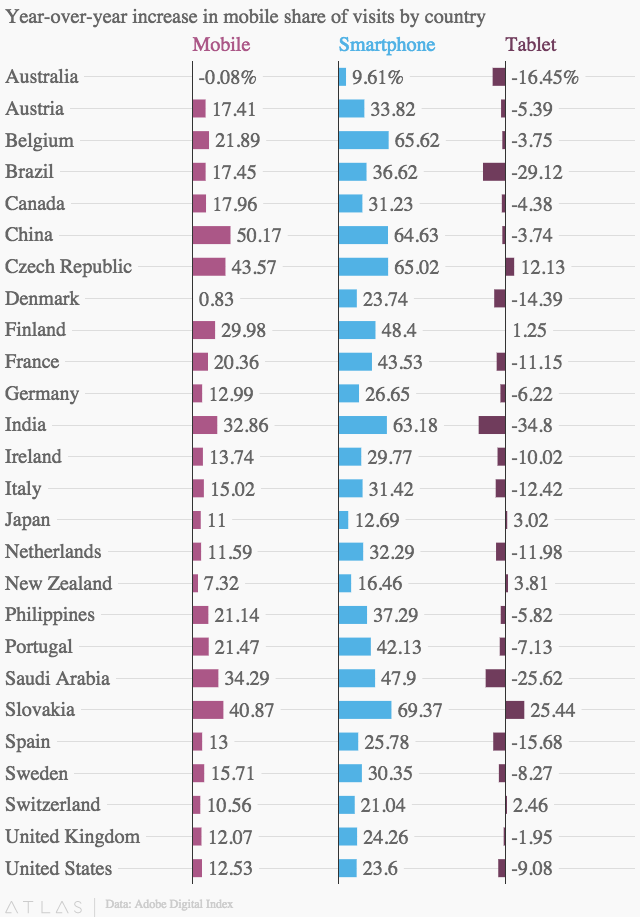 There was a similar pattern in India, where Facebook recently lost a battle to distribute its free internet service on the grounds of net neutrality. Thirty-four percent of visits came from mobile devices, increasing 33% year over year. Like China, the share of smartphone-only visits was dramatically higher at 63%. Of the countries studied in Adobe’s report, India saw the steepest decline (down 35%) in tablet visits, which is striking particularly because cheap tablets—some homegrown ones in India are available for as little as $20—were once seen as a device that could educate billions.

The explanation for this shift can be summed up in one word: phablets.

“There was a time when tablet browsing surpassed smartphone browsing, and that trajectory was expected to continue,” said Tamara Gaffney, principal analyst at Adobe Digital Index. “Since then, however, browsing growth by these devices has decreased significantly, and we think this is mainly because screens are getting bigger.”