Gwen Carr didn’t need to describe the details of her son’s killing to the audience that thronged a library in Bennettsville, South Carolina last night. The world has already seen the surreptitiously shot smartphone video that Carr still cannot bring herself to watch—the one showing a New York police officer forcing Eric Garner to the ground, hooking his elbow around Garner’s neck, and suffocating the 43-year-old African-American man to death.

Plus, there was another dimension to her son’s tragedy that Carr was keen on mentioning.

“We need a [presidential] candidate that’s going to be with us,” Carr told the audience, “because we need someone who knows that black lives matter.” And that person, she said, was Hillary Clinton.

Carr wasn’t the only one making this point. Flanking her in the packed library classroom were Sybrina Fulton, Geneva Reed-Veal, Maria Hamilton, and Lucy McBath—the mothers, respectively, of Trayvon Martin, Sandra Bland, Dontre Hamilton, and Jordan Davis. In turn, each woman detailed what happened to her child, closing with a few sentences of support for Clinton.

Of course, Carr, Fulton, Reed-Veal, Hamilton, and McBath didn’t spontaneously descend on Bennettsville’s library. The event was part of Clinton’s “Breaking Down Barriers” campaign, a series of forums held all over the state in the run up to Saturday’s primary, in which the five mothers, as well as civil rights attorneys and New Jersey senator Cory Booker, discuss racial prejudice in the US criminal justice system and gun control—and praise the former secretary of state’s track record on those issues.

The five women’s testimonies—raw and emotional—could boost Clinton’s support beyond South Carolina’s borders. Far more powerful than any of Clinton’s dozens of politician endorsements, their accounts could help mend the candidate’s “authenticity” problems.

So far, the former secretary of state has suffered from the perception, particularly acute among young voters, that she is a calculating Washington player whose principles whip with the political winds. Her competitor, Bernie Sanders, is seen as a man whose righteous idealism drives his crusade for justice. Both vow to fix laws and institutions that disproportionately hurt African-Americans and other minority communities.

Of course, the backing of women whose children were killed by those inequities certainly boosts Clinton’s policy-making credibility. More importantly, though, their endorsements offer a rare glimpse at a warmer Hillary, showcasing not just her human side, but a maternal impulse we seldom see. Though Clinton herself just can’t thaw her perennially chilly persona in a way that connects her to undecided voters, these women’s portrayals of her maybe somehow can.

A big Clinton win is clutch

While Clinton will undoubtably beat Sanders in South Carolina (polls have her up roughly 57-33), there’s more at stake than just adding another state to her “win” column. Dousing the Sanders surge seen in Nevada, New Hampshire, and Iowa will help Clinton pull decisively ahead, strengthening her credibility. 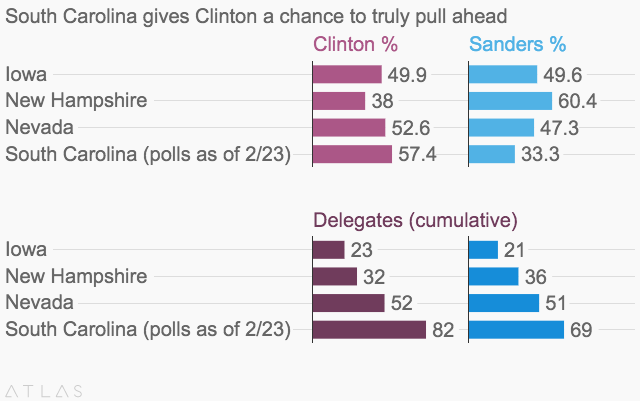 The state is known as her “firewall,” the election that will let her finally put some distance between her and Sanders.  Clinton herself even called South Carolina “one of our first lines of defense” while speaking to a predominantly African-American crowd at a party dinner in Charleston in January.

However, this “firewall” logic depends heavily on the assumption that Clinton has sealed up “the black vote.” That’s important because, in 2008, African-Americans made up 55% of voters in the state’s Democratic primary. A particularly critical bloc is African-American women over the age of 45. A strong showing in South Carolina will brighten Clinton’s prospects in November, hinting that she may be buoyed by the rising turnout of African-American voters in recent elections. 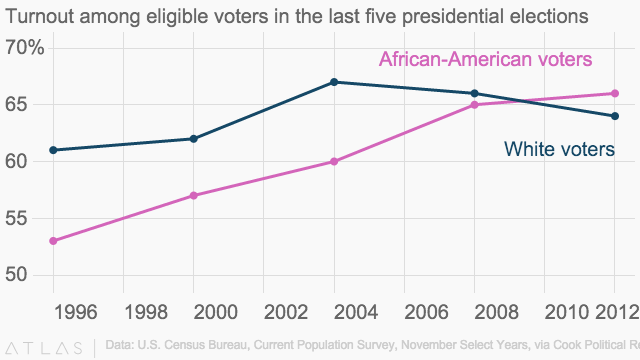 The problem is, Sanders has been snagging endorsements from a slew of intellectual heavyweights who are African-American, including Ta-Nehisi Coates, Michelle Alexander, and Spike Lee. Other key supporters include Keith Ellison, and Erica Garner (Eric Garner’s daughter). Plus, it’s not clear that young African-Americans are on board with Clinton, and the Sanders campaign has been ramping up its get-out-the-vote efforts in the last few months.

While Clinton is still the overwhelming favorite to win her party’s nomination, her unexpected struggle to shake Sanders is rattling voters’ confidence in her ability to turn out enough votes to win in November.

Of course, Clinton creates her own problems. Maybe it’s her policy-wonk recitations, maybe it’s the need to seem as tough as her male competitors—whatever the case, though, the more practiced the candidate, the less human she seems. This is often referred to as her “lack of authenticity,” though detractors call it something plainer—that she simply can’t be trusted. Fair or not, it’s resonating with voters. For example, behold the results from the Nevada primary exit polls:

Clinton’s corporate donor list, which includes big banks and pharmaceuticals, doesn’t help. Neither do endorsements from lawmakers. Even those from influential ones—for instance, Representative James Clyburn, South Carolina’s most respected Democrat and a pillar of the state’s African-American community—reinforce the sense that politics, and not genuine conviction, account for Clinton’s support. Hillary seems doomed to be the voice of special interests, while Bernie is able to use his kooky outsider status to cast himself as the voice of the people.

With the Breaking Down the Barriers series, there are signs that the Clinton campaign is getting creative about combating her image problem. More importantly, it also suggests a commitment to giving voice to some of America’s least heard voices.

The event featuring Carr, Fulton, Reed-Veal, Hamilton, and McBath grew out their meeting with Clinton in Nov. 2015 in Chicago, according to the Clinton campaign. They praised her track record and her understanding of the systemic causes of violence against African-Americans.

However, what seemed to have struck all of the women during this discussion was the fact that Clinton spent most of the time simply listening to them—and for an hour and a half longer than the originally scheduled 30 minutes. But the very fact that she set up the meeting was important, said Sybrina Fulton, Trayvon Martin’s mother.

“No other candidate reached out to us,” Fulton told Quartz. “Even in the presidential debates, she was the first one that [highlighted racial bias in the criminal justice system].”

This message resonated with Robyn Johnson, a teacher who has lived in Bennettsville for 49 years.

“It’s important [Clinton] get elected because she has the best interests of everyone—no matter what color you are, whether you’re a man or a woman—at heart,” she told Quartz. “It’s crazy listening to other candidates [who are prioritizing unrelated policy issues] as though African-Americans don’t exist.”

Clinton didn’t just listen to their stories. The former secretary of state also noted Fulton’s rundown of suggestions for reform (e.g. drug-testing the shooter, and not just the victim), as well as those from the other mothers.

“We can hear [our recommendations] being implemented in her policy and reform proposals,” Fulton told Quartz.

There should be more of this too; in coming days, Clinton will join the quintet in a series of town hall meetings around South Carolina.

The women also succeeded in something Clinton and her spokeswomen so far have been lousy at: turning her gender into a strength. During her 2008 campaign, Clinton barely talked about being a woman (at least, until her “we’ve put 18 million holes in the glass ceiling” concession speech).

This time she’s far more willing to use her gender in her campaigning. But American women don’t care, at least not younger women, who are less interested in putting the country’s first female president in office than in “feeling the Bern.” Attempts—most notoriously, by Madeline Albright—to appeal to their feminism have flopped.

In the five speakers at the Breaking Down Barriers event, Clinton has found some more compelling spokeswomen—advocates not just of Clinton as a woman, but as a mother too. Though none of the mothers mentioned it specifically in their speeches, a source of Clinton’s connection—and ultimately, credibility—that emerged during the meeting was what they perceived as the secretary’s maternal impulses. In a conversation with Quartz, Fulton noted this explicitly while recounting how “heartfelt” Clinton’s dedication to the issues seemed.

It’s not an image that leaps readily to mind—this sense of Clinton as a protective matriarch. Yet that theme somehow pervaded the speeches by Fulton and the other mothers enough that at least one audience member picked up on it. Brittany Stuckey, a thirty-something playwright and freelance writer living in Bennettsville, hasn’t yet decided whom she’s voting for on Saturday, but she left the library leaning toward Clinton. “You can’t think of Hillary and not think of Bill,” she told Quartz. “But listening to these women, I’m starting to think maybe this country needs a mother’s touch.”

Of course, it might be easy for Clinton critics to dismiss this latest campaign flourish as a cynical ploy to wring votes from the five women’s wrenching losses. The speakers, however, bristled at this suggestion. ”We are very strong women. I don’t think they could have made us [endorse her],” Sybrina Fulton said derisively.

As Gwen Carr pointed out, their decision is ultimately focused on the best interests of the community. ”We all collectively want to help each other. So we feel like if we endorse Secretary Clinton, that we can get the job done, because she is with us,” said Carr. “We’re endorsing her because she endorsed us.”