On the surface, streaming video appears to be at the forefront of diversity in Hollywood. The well-rounded female cast in Netflix’s Orange Is the New Black has been praised by critics and audiences alike, and Amazon Prime’s Transparent was lauded for its portrayal of a late-in-life gender change.

But behind the camera, according to a new study from the University of Southern California, streaming video is lagging behind its old-media counterparts in several key measures of gender and minority representation.

That’s especially the case at the executive level.

But it’s also noticeable in the credits. Streaming media’s share of non-white directors is lower than in film or cable TV (but slightly higher than in broadcast TV)… 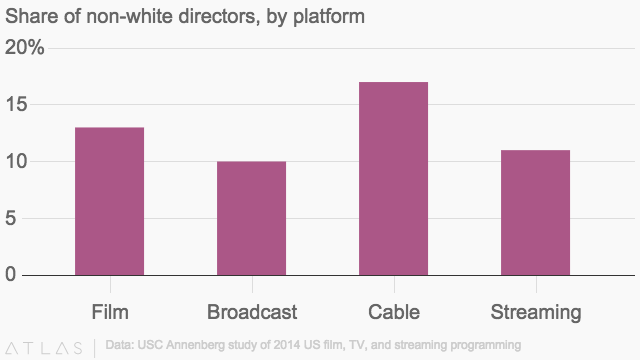 … and while streaming media has a slightly higher concentration of female show creators than traditional TV does, it lags cable and broadcast TV in the representation of female and minority writers, directors, and executives. (Next to film, however, streaming looks relatively female-friendly.)

The numbers, from USC’s Annenberg School for Communication and Journalism, are a reminder of how long it has taken women and minorities to make inroads in the traditional TV and film industries (both of which still fail to reflect societal demographics), and of how closely tied digital video is to the notoriously diversity-deficient tech sector.

“Shifting from invisibility to inclusion is no easy task,” the authors note in the introduction to their analysis. But entertainment companies, they argue, “have the opportunity to dismantle the structures and systems that have guided decades of exclusionary decision-making.”

In terms of content, they found there were fewer racial and ethnic minorities featured on streaming video than on the other media platforms. Just 2% of digital videos depicted a balanced cast of characters from underrepresented groups, including blacks, Hispanics or Latinos, Asians, Middle Easterners and other non-white groups. That compares with 7% of films, 13% of cable series, and 19% of broadcast shows that achieved a demographic balance. (Programs that featured any underrepresented characters within 10% of US Census statistics were considered balanced, for the purposes of the study.)

To be sure, streaming video led the pack in diversity in two key areas: women in speaking roles and portrayals of transgender characters. (Shows on streaming services accounted for six of the seven transgender characters portrayed in the 414 movies, TV shows, and digital series the USC Annenberg study examined, which is a notable feat.)

Female characters made up 38% of the speaking roles in streaming, compared to 37% in cable, 36% in broadcast, and 29% in film. And streaming had the largest share of middle-aged female characters, a group that is often excluded from TV and film, especially among minority women.

But streaming shows also were more likely than films (but less likely than TV) to sexualize female characters, by having them dress in revealing clothing or showing full or partial nudity.