More out-of-state visitors to Colorado are ending up at the hospital after overindulging in the ample pot offerings at local dispensaries, where anyone 21 or older can legally buy weed.

Emergency room visits by tourists who consumed pot nearly doubled to 168 per 10,000 visits in 2014, the year recreational marijuana became legal, from 85 per 10,000 visits the previous year, according to a study published in the New England Journal of Medicine Feb. 25. Its authors, scientists from Northwestern University and University of Colorado School of Medicine, examined cases from an academic hospital in Aurora, a city adjacent to Denver.

Marijuana legalization has spawned a tourism industry offering all kinds of ganja experiences. The opportunity of lighting up without the threat of  jail time seems to be attracting marijuana enthusiasts from other states. Nearly half of visitors polled in surveys commissioned by the Colorado Tourism Office said legal access to weed influenced their decision to travel to the state, the Denver Post reports.

While the higher number of ER visits by tourists could be a result of increased willingness to disclose pot consumption now that drug is legal, the study’s findings suggest it may have more to with their lack of experience.

Statewide data, which the authors also analyzed, also showed tourists visited the ER for marijuana aliments more often than Colorado residents, although visits by locals were up sharply. 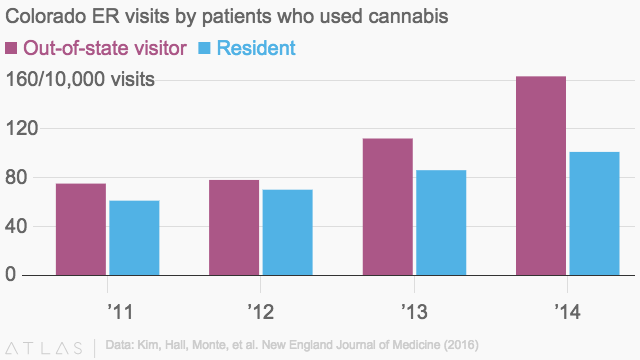 The study did not examine what patients consumed, but author Howard Kim says that the delayed effect of pot brownies and cookies may be catching tourists off guard.

“People eating marijuana products often don’t feel any effect immediately, leading them to eat another edible,” Kim told Northwestern University, where he is a postdoctoral fellow. “When the effect finally kicks in, it is much stronger.”

Overdoing it can have some pretty nasty consequences, including anxiety, hallucinations, high blood pressure and vomiting. But most patients were well enough to leave the hospital after a few hours, according to Kim.