Japan is shrinking. And it will likely continue to do so.

Official census data released today (Feb. 26) from the country’s internal affairs ministry show there were 127.1 million people in Japan in 2015—dropping 0.7% from the 128.1 million recorded in 2010, and marking the first population decline since the quinquennial census began in the 1920s.

That’s the equivalent of the entire city of San Francisco disappearing in five years. By way of some comparison, the US grew by 9.7%—or added 27 million people—in the 10 years to 2010.

Japanese broadcaster NHK reports ministry officials see the decrease as a continuing trend, and the United Nations has an even more dismal prediction: that the country will only have 83 million people by 2100. Politicians, economists, and researchers alike agree the overall decrease finds its roots in a rapidly aging population, a decline in birth rates, and a staunch national resistance to immigration. 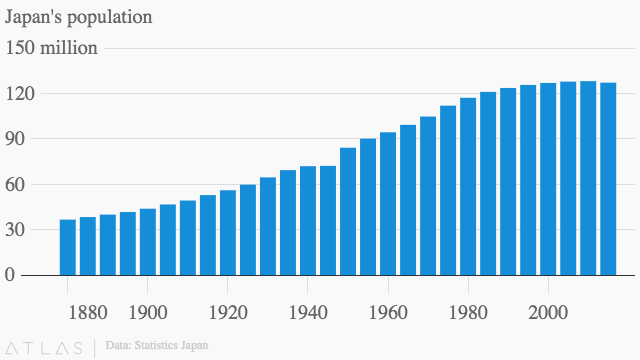 Some areas have felt the dips more keenly than others. While Toyko and seven other prefectures saw an uptick in population, the remaining 39 saw the opposite; Fukushima, hit by an earthquake and tsunami in 2011, posted the biggest loss—roughly 115,000 people. 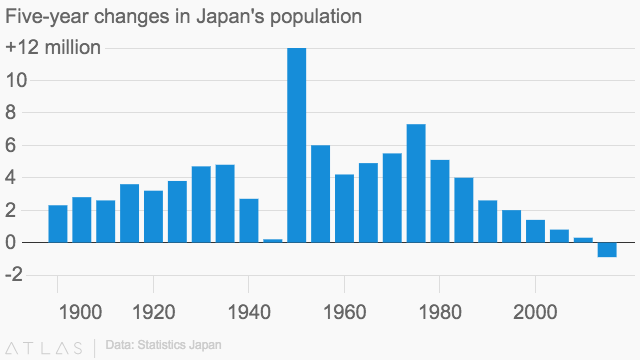 It’s not that Japan’s government is sitting idly. Prime minister Shinzo Abe has made it his determined mission to keep the country growing, rolling out tax incentives and childcare policy improvements by the dozen—even installing a “minister to promote 100 million active people” in his cabinet.

But government projections also say 40% of Japanese citizens will be more than 65 years old by 2060; so in order for the population to be kept above 100 million, Japanese families would have to substantially increase the number of children they’re having. (The current birth rate is 1.4 per woman.)

That’s a difficult goal, considering the instability of the country at large these days. Unless the government drums up a winning new strategy to boost either the birth rate or the country’s immigration rate, Japan’s bustling streets and neighborhoods will keep getting noticeably quieter.