Good luck getting paid on time if you’re running a business in Australia. The average time a business there has to wait for an invoice to be settled is more than 26 days after payment is due. And Australian firms aren’t alone. The great majority of invoices globally are settled after their due dates. That’s according to new data (pdf) from MarketInvoice, a London-based firm that lends to businesses based on their outstanding invoices. 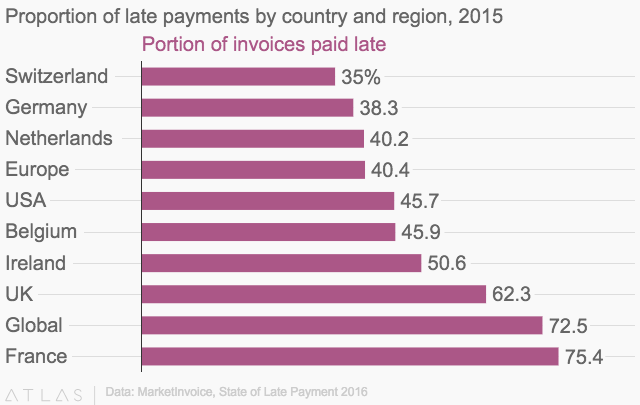 That’s in stark contrast to some economies, where invoices are actually settled early. In Japan, you can expect to be paid for your goods or services nearly a week before the bill is due. A clutch of European countries also boast early average settlement times, including Belgium, the Netherlands, Switzerland, Germany and Ireland. Here’s what that looks like charted: 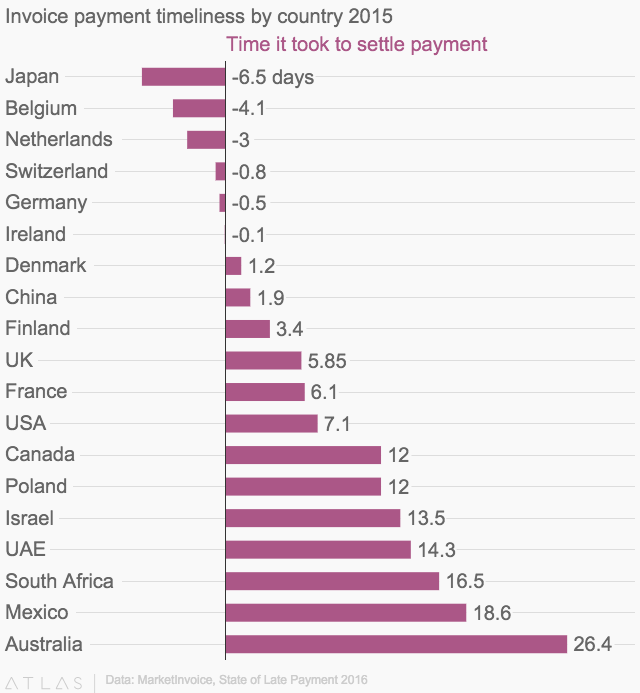 MarketInvoice gathered the statistics by looking at 30,000 invoices from 1,000 companies across 80 countries. It had unique access to the late payment data because its business is to lend to companies based on their outstanding receivables. Companies submit invoices to be assessed for borrowing, allowing MarketInvoice to track invoices based on their due dates and actual settlement dates. The firm lent £300 million in 2015, it told Quartz.

The MarketInvoice data is also broken down by sector. Banks turned out to be the timeliest customers, settling their bills less than a day after they were due. By contrast retailers and the UK public sector were among the worst offenders. Supermarkets and e-commerce firms paid up about a week late on average, while retailers on commercial drags around the world took two weeks to settle their overdue bills. Among the late-paying organizations in the UK public sector, the vast majority comprised schools and academies, followed by hospitals and the public health service, and then local governments. Some 80% of invoices owed by schools and academies were paid late, according to MarketInvoice. 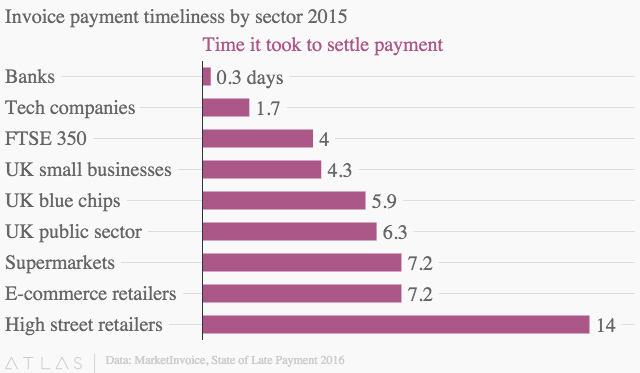 Invoice financing is part of a rapidly growing alternative lending industry in the UK and Europe. According to the trade body that represents invoice finance firms, the Asset Based Finance Association, this type of borrowing hit £880 million in the UK in 2015, doubling from a year earlier. It’s still a tiny slice of the overall lending pie, where more than £2 billion in new loans were made in the third quarter of 2015 alone, according to the latest statistics (pdf) from the Bank of England.

MarketInvoice intends to use its data to let loan applicants know when they’ll realistically see their bills paid. The firm charges 1-2% of the face-value of an invoice for its loans, so it’s clear that tardy payments aren’t always unprofitable.