With 13 million Hispanics expected to cast their ballots, Latino voices will be heard in the 2016 election.

But they won’t all be saying the same thing.

Tomorrow (Mar. 15) voters will cast their ballots in Florida—a crucial primary battleground state where Latinos make up a significant share of voters. It has been a polarizing election, with Donald Trump and other Republican candidates competing to see who can use the harshest rhetoric about immigration across the southern US border—even though two of them, Ted Cruz and Marco Rubio, are the sons of Cuban immigrants.

But the hot-button topic in the 2016 election has all too often led to the Hispanic community being lumped in together as a monolithic voter bloc. While US Latinos are united by language and many core priorities—the desire for a better life, and concerns about the economy and education—they’re also incredibly diverse, coming from a wide range of Spanish-speaking countries with different socioeconomic backgrounds.

Florida, for example, has one of the most diverse Hispanic voting populations in the country, with a well-balanced blend of people from different Hispanic backgrounds, and a mix of US- and foreign-born citizens. 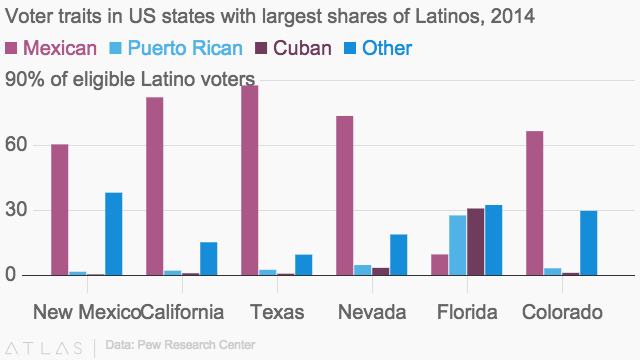 Yes, the majority of Latinos in the US—about two-thirds—typically vote Democratic and lean to the left. But Latinos also voted more heavily Republican in a few recent key races: Consider the 2010 midterm elections when the Latino vote helped Rubio win a Senate seat, and Republican Cory Gardner’s 2014 win in Colorado, where 14% of the electorate was Hispanic. And, let’s not forget that Latinos helped put George W. Bush in the White House in 2004.

The Latino vote varies so drastically, in part, because it’s comprised of people from dozens of countries across North, Central, and South America, as well as the Caribbean.

In 2014, the last major US election year, 60% of the US Hispanic population was Mexican-American, a group that tends to lean to the left and vote Democratic; 13% were Puerto Rican, with a similar voting record; 5% were of Cuban descent, a group that leans in the opposite political direction; and most of the rest were from other Spanish-speaking countries like El Salvador and the Dominican Republic.

Those dynamics may have changed slightly in the last two years (More Puerto Ricans, for example, have migrated from the commonwealth to Florida, Texas, and North Carolina), but still largely hold true.

The political and economic climates of these regions often shape the political stances of Latinos in the US, especially among first-generation immigrants. Cuban-Americans, for example, tend to be more conservative and politically active, which partly stems from the anti-communist sentiment that followed the 1959 Cuban revolution. And in some countries like Colombia and Chile, voter turnout is even lower than in the US, so immigrants are less politically driven once they arrive in the United States.

Latino immigrants also have vastly different experiences assimilating into life in the US. Undocumented immigrants who cross the border into the US from Mexico are frequently arrested, if caught. However, Cubans caught entering the US without documentation are granted refuge if they have at least one foot on US soil. Cubans are also allowed to become permanent residents after a year of living in the US, thanks to the Cuban Adjustment Act of 1966—a privilege most other immigrant groups don’t get. And Puerto Ricans are natural-born citizens because the island is a US territory, so those who come to the mainland are automatically eligible to vote. (Residents of Puerto Rico, however, can only vote in the presidential primaries and not in the general election.)

Meanwhile, second- and third-generation Latino immigrants, born and raised in the US, don’t always share the same values as their grandparents. Demographers have a hard time even classifying this subset of Latinos because they’re so diverse.

And some Americans of Latin American and Spanish descent don’t agree on the terms used to describe the population—Latino and Hispanic—even though they’re often used interchangeably.

On top of all those moving parts, Latinos are subject to the same demographic divides as other ethnic groups, including age, gender, and income.

“If you start with all the ways the Latino electorate can be subdivided into distinct groupings—age, generation, origins, etc.—and then you add the difficulties of explaining the politics of some 10 million voters with a simple label, you have to ask whether the idea of a voting bloc is really useful in a country as big and complicated—and this year, as unpredictable—as the United States,” Roberto Suro, professor of public policy and journalism at the University of Southern California and director of the Tomás Rivera Policy Institute, told Quartz.

So if the Latino community can’t be neatly packaged into a single voter bloc, how can we gauge the influence of this increasingly powerful voter base?

This year, there are three Hispanic demographics up for grabs that could have a significant impact on the election, especially in key swing states like Nevada, Colorado, and Florida and places like California, New Mexico, and Texas, where Latinos make up significant shares of the population.

Young people will make up nearly half of eligible Hispanic voters in 2016—a larger share than in other ethnic groups. And although voter turnout among young Latinos has been underwhelming in the past, their sheer volume in this race makes them a force to be reckoned with. More than 3 million Latinos have reached adulthood since the last presidential election and nearly all of them were born in the US, which means they’re automatically eligible to vote.

Rudy Zamora, a 29-year-old Mexican immigrant who currently lives in Nevada, plans to cast his vote for the first time this November, even though he’s lived in the country for 27 years. Zamora’s vote is significant, he told Quartz, because, like others in his position, he will be voting on behalf of family members who cannot participate.

“Most of the [Latino] millennials are probably sons or daughters of undocumented workers in the US, so those millennials are going to be voting for their families,” said Zamora, who is vice president of the Young Democrats of Nevada.

While Zamora could have completed the citizenship process earlier in order to vote in previous elections, he said it was important now, more than ever, to speak up for his community.

“We have a lot of things at stake in this election,” Zamora said, referring to anti-immigrant rhetoric from Republican candidates like Trump, Cruz, and Rubio, and the three Supreme Court seats that could be opening up in the coming years. “We want to make sure that we move forward and don’t regress.’

Zamora also exemplifies another key segment of the Latino electorate: people who were born outside of the country and become US citizens. This population made up about a quarter of eligible Latino voters in 2014. And they are the second-largest force driving up the Hispanic population, with about 1.2 million Latinos in the country deciding to become citizens between 2012 and 2016, according to Pew Research.

This group probably won’t be very influential in the primaries. Naturalized citizens aren’t as familiar with the US’s primary system, although groups like Mi Familia Vota and National Council of La Raza attend citizenship ceremonies to register newly-naturalized citizens to vote and teach them about the political process. But, as new citizens, they’re more passionate about exercising their right to vote and have had stronger voter turnout in recent general elections than US-born Latinos.

People over the age of 65 make up the smallest share of the US Latino voter base, but they’re also the most likely to show up to the polls, as is true broadly. In 2012, nearly 60% of eligible Latino voters who were 65 and older said they cast their ballots—the strongest voter turnout of any age group—which makes them one of the most influential Hispanic subgroups.

As you might expect, issues like social security, retirement, and solvency are especially important to them, as are the issues common to many Latinos, such as the economy, education, and immigration, Monterroso at Mi Familia Vota said.

“Latinos, regardless of political-party affiliation, are looking for answers to issues that impact our communities,” Monterroso said. “We want better opportunities for our kids. We want a better life for ourselves that can provide us with healthcare and decent pay. And we definitely don’t want to be insulted by any political party or candidate.”