E-commerce is a capital intensive business that’s not always the easiest thing to explain. That might be one reason why so many e-commerce startups have both raised vast sums of funding and are often given the descriptor ”the Amazon of.” Souq, which just closed a $275 million round of funding, is the latest company to raise a bunch of equity capital. It’s referred to as–you guessed it–the Amazon of the Middle East.

There are startups touted as the ”Amazons of” all over the globe. One big one, the Amazon of India called Flipkart, has attracted a total of $3.4 billion in funding, with $700 million in the last round in July 2015. There’s South Korea’s Coupang, an Indian Flipkart rival called Snapdeal, and a startup that wants to be “the Amazon of” the US called Jet.com. Here’s a chart of some of the more prominent pretenders to the Amazon throne: 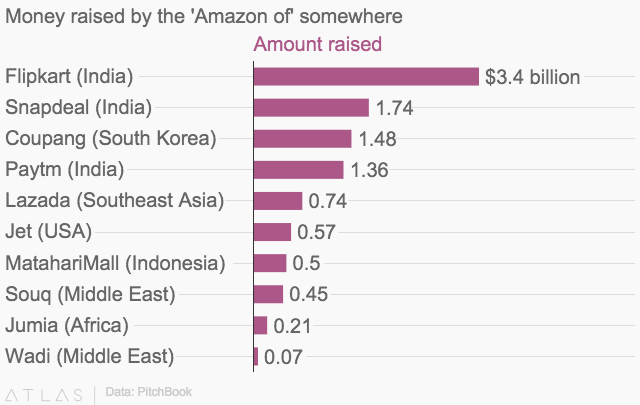 The chart only looks at private companies. One company has taken its “Amazon of” mantle and become a serious competitor to Jeff Bezos’ company. That’s New York Stock Exchange-listed Alibaba, of course, with its Taobao e-commerce platform, and roughly $175 billion market cap. That’s less than Amazon’s $260 billion valuation, but given the increasingly crowded and well-funded field,  competition is set to intensify.