These findings, from a working paper published this week by the National Bureau of Economic Research, suggest it’s harder for sexist societies to evolve even when women in those places are better educated.

Economists examining the relationship between education and marriage across 23 developed countries in East Asia, Europe, and North America found that the gap in marriage rates between educated and uneducated women widens with the conservativeness of a country’s views toward women’s roles.

While skilled women are more likely to be married than their unskilled peers in the US, Canada, and some European countries (this has been the case in the US since about 2010), the reverse is true in Asia, the study found.

In Hong Kong, for instance, while all women between the ages of 35 and 44 were only slightly less likely (4%) to get married than American women, the gap widens dramatically when education is considered. Highly skilled women in Hong Kong had a 72% chance of being married, compared to 87% in the US. The difference becomes even more pronounced when you consider uneducated women are more likely to be married than their educated peers, Jessica Pan, an economist at National University of Singapore and one of the paper’s authors, tells Quartz.

Because those unmarried women in Hong Kong rarely have children, they won’t be in a position to raise sons with more liberal views. And that slows the pace of social change. Research has shown that the sons of working mothers tend to adopt more progressive views about women in the work place. 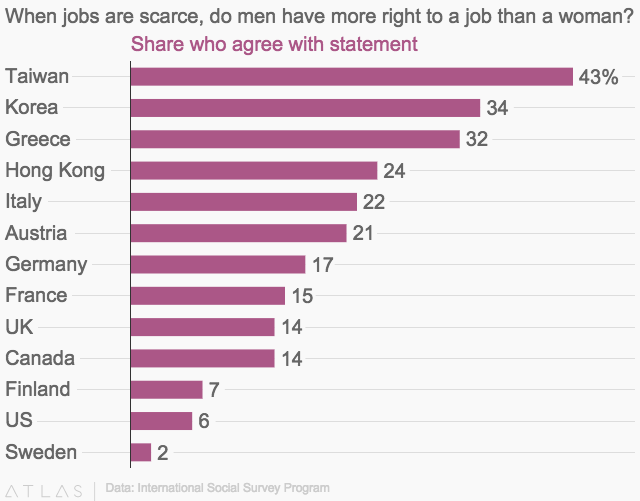 Nations with a wide marriage gap between educated and uneducated women face demographic and economic challenges. The countries that registered as the most sexist—Taiwan, Korea, Japan, Greece, Hong Kong, and Italy—have some of the world’s lowest birthrates. Countries with declining populations risk not having enough wage earners to generate taxes to care for their aging populations.

Educated women in sexist countries pay personal costs throughout their lives. Without children, they are also without offspring to care for them in their old age, a particular problem in traditional societies where families assume responsibility for elders, said Patricia Cortes, a Boston University economist and a co-author of the paper.

Since the cycle of sexist attitudes is self-reinforcing, how can attitudes toward working women evolve? The answer is simple, and depressing: As the earning power of working women begins to climb, men will become more willing to marry them, Cortes said.

“When women start working, in places that are very sexist, men have a high cost to marrying,” Cortes said, referring to overcoming social norms and their own biases.  Once men are compensated by more household wealth, “the model predicts you will see them start marrying again.”