Facebook paid just £4,372 ($6,187) in corporation tax in the United Kingdom in 2014 and £3,169 ($4,005) in 2013—less than an average London schoolteacher. But starting from April 1, the tech giant will start paying millions more in taxes to the UK, as it will no longer route advertising revenue generated there to its Irish sister company.

Facebook joins Google in creating new arrangements this year that will see more taxes paid to the UK. The UK’s corporation tax rate is 20%. Ireland’s corporation tax is 12.5%, and it levies even lower rates on some earnings, like those linked to research and development.

Today (March 4), Facebook began notifying large UK customers (which include the supermarket chains Sainsbury’s and Tesco and the advertising conglomerate WPP) that they will no longer be getting bills from Facebook Ireland from April 1. Instead, their invoices will come from Facebook UK.

“The new structure is easier to understand and clearly recognizes the value our UK organization adds to our sales through our highly skilled and growing UK sales team,” a Facebook spokesperson said in a statement to Quartz. 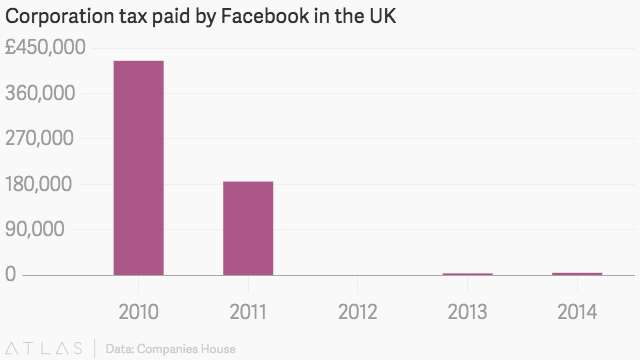 Facebook said it was making the move because of “changes to tax law” in the UK, although it did not specify what changes it was responding to. A new tax measure called the “diverted profits tax” came into effect on April 1, 2015. It levies a 25% tax on profits deemed to have flowed out of the UK through ”contrived arrangements” that allow tax avoidance. A source with knowledge of the situation told Quartz that the move was being made in response to the diverted profits tax. 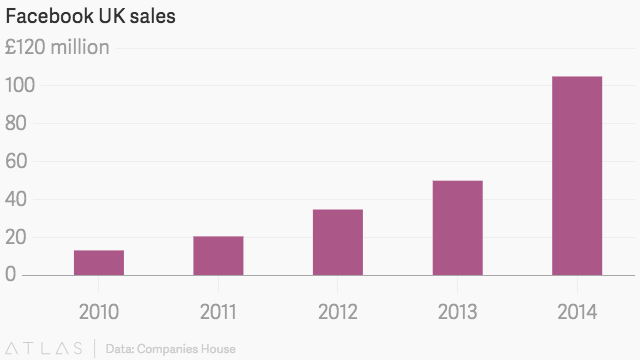 Google struck a deal with the UK tax authority in January, which saw it agree to pay £130 million ($185 million) in back taxes over the previous 10 years, after an investigation by the authority. A parliamentary committee criticized that deal for being too low.

A source with knowledge of Facebook’s situation told Quartz that Facebook’s new structure has nothing to do with back taxes, and that it had been planning the move for some time. But the Financial Times reported in January that Facebook was under government scrutiny (paywall). Neither Facebook nor the tax authority have confirmed an investigation.

There’s another difference between Google and Facebook’s UK tax structures. Whereas Facebook will no longer let its UK revenue flow to Ireland, Google continues to let UK revenues be recognized by its Irish entity, but more of that money will flow back to its UK entity under its new tax agreement.

“This gives complete lie to Google’s current claim that it could not pay more tax in the UK,” Richard Murphy, a City University professor who tracks Google’s tax affairs, wrote on a blog. “Of course it could. They really would be wise to take note.”