On Thursday (March 3), the United Nations announced what might seem like a wonderful piece of news: Global food prices are nudging toward a seven-year low. According to the UN’s Food and Agriculture Organization (FAO), prices in international markets for commodities like grains, sugar, meat, and dairy were 16% lower in January 2016 than they were around this time last year, and at their lowest since April 2009. In short, there’s a more-than-ample supply of food in the world right now.

So what does this mean for your grocery bill?

Prices for raw food products really are dropping, thanks to better growing conditions in many countries, large carry-over reserves, and cheaper oil. (Food production and oil prices are closely linked because agriculture is so energy-intensive.) 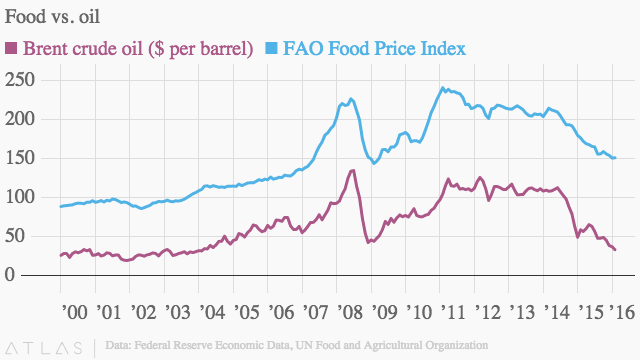 But these price decreases are for natural products that don’t go through any extra production processes. The only parts of the globe that might actually see price drops, then, are developing regions where people eat mainly raw, unprocessed food. And even in those areas, the cheaper prices won’t necessarily make a difference in shoppers’ quality of life, as income levels are staying troublingly flat; in South Africa, food prices are actually going up because of price hikes in other basic essentials, like electricity and water.

In the rest of the world, there will be hardly any difference at all.

“Fruits and vegetables should be coming down in price, but processed foods won’t,” Evan Fraser, a professor specializing in food security at the University of Guelph in Canada, tells Quartz. He adds, ”For the average North American, the price of the corn in [a box of processed] corn flakes is relatively small. Most of what you pay for is advertising, marketing, packaging—there are a lot of filters.”

What falling prices will change are the salaries of small-scale farmers in the developing world, who fetch measlier sums for their products when they’re in such abundance. For these populations, the decrease in global food prices isn’t good or neutral news, but actually fairly worrying.