The project of building a new nuclear power station on the UK’s west coast is playing out like a slow-moving disaster movie.

At its center is EDF Energy, an energy giant majority-owned by the French government. France has long been a firm supporter of nuclear energy, and so EDF is a natural choice to build the first reactor in the UK for a generation. But the costs of the project are sky-high, and the uncertainties legion. It emerged today (March 7) that EDF’s head of finance had quit. He had allegedly wanted to push back plans (paywall) for the project’s final investment decision by several years.

The company’s share price fell 6% on the news by mid-morning UK time. It continued a year-long downward trend that suggests the British project, as well as other plans, aren’t popular with shareholders: 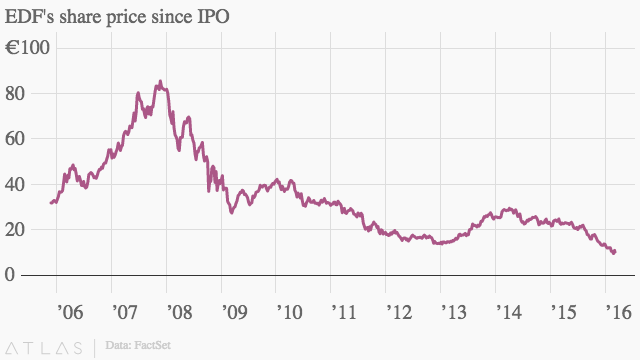 Hinkley Point C, the planned UK reactor, has several times been called the most expensive thing ever built, anywhere. Estimates of its cost vary, from the company’s £18-billion projection, up to as much as £24.5 billion, estimated by the European Union.

It’s so expensive that the UK government has had to guarantee a price for the energy it will produce—which some say is cripplingly high—for 35 years.

And the project has hit delay after delay. In 2008, EDF said the power station could be complete in 10 years. No work has yet begun. In the meantime, a disaster at Japan’s Fukushima plant has turned many firmly against nuclear—including Germany, France’s neighbor.

Investors have come and gone. In the latest addition to the roster, China General Nuclear Power, China’s state-owned nuclear operator, agreed to take a 33.5% stake in the plant last year. So far, though, that latest investment doesn’t appear to have kickstarted anything. Worries over the technology to be used remain. EDF’s board is reportedly split.

Jean-Bernard Levy, chairman of EDF Energy, said in an emailed statement that he regretted the “haste” of his finance chief’s departure. He reiterated the company’s commitment to make a final investment decision “in the near future.”

If it gets built, the station could provide 7% of the UK’s power needs. It’s just the first of several new nuclear plants the company wants to build in the UK.