Times are getting tough for the startup industry—and its starting to affect financial technology startups.

According to CBInsights, a research firm, says the fintech startup industry saw a pullback in venture capital funding in the fourth quarter of 2015. 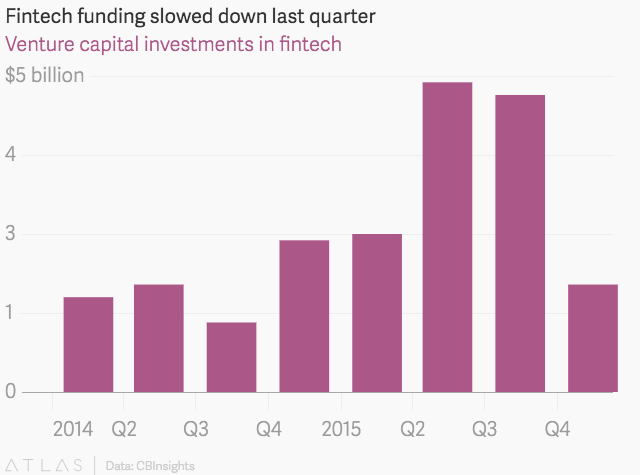 The data is more bad news for fintech companies. Public companies such as Square, which reports earnings today, and Ondeck have seen declines in their share prices since their respective IPOs. More people are finding it difficult to pay back loans from alternative lenders. Credit agencies like Moody’s are worried about those alternative lenders, too. And increased regulatory scrutiny has forced Lending Club to change its fees.

Meanwhile, traditional financial institutions say they can best startups by digitizing their own businesses. “I think the banks are pretty good at using digital technology to make it easier for customers…It will be a challenge for anyone to be better, faster, cheaper than us,” JPMorgan Chase CEO Jamie Dimon said in a recent interview with Bloomberg.