For years, startups trying to disrupt financial services have focused on areas like payments and lending—things customers do frequently that companies can take a slice of.

But those industries are getting crowded—tech giants like Apple, Google, and Samsung have all developed mobile wallets, and big banks, including JPMorgan Chase and Goldman Sachs, are getting into the digital lending space.

Last year, VCs poured $2.65 billion into insurance startups globally, according to research firm CBInsights, up from $740 million in 2014. 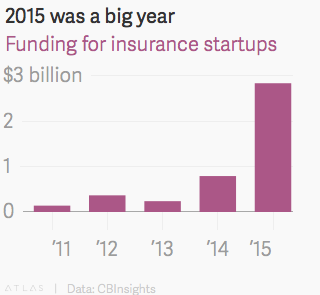 Fundraising ended the year strong and has kept the momentum. In December 2015, Lemonade, a peer-to-peer insurance company, raised $13 million in seed funding from Sequoia Capital—the VC’s biggest seed funding round ever. Insurance comparison site PolicyGenius secured $15 million in funding in January in a Series B round, bringing its total funding to $21 million. Next Insurance—an insurance startup led by executives from Check, a mobile payments startup acquired by Intuit in 2014 for $360 million—announced it raised $13 million earlier this week (March 15). And sources say secretive insurance startup Slice Labs raised a seed round last month of around $3-$4 million. Tim Attia, Slice’s CEO, confirmed a deal to Quartz but declined to discuss specifics.

Insurance is a highly antiquated, regulated, and entrenched industry, which make it both appealing and problematic for startups. VCs and entrepreneurs see three key problems in the insurance world that make it ripe for a shakeup, Lemonade’s Daniel Schreiber told Quartz. First, it’s a simply massive market. Second, they believe it’s broken—the business model focuses on eliminating risk, not helping customers when they need it. And, lastly, it’s remained untouched. At its core, insurance today is similar to how it was 50 years ago.

Another factor is the abysmal user experience, Brendan Dickinson of VC firm Canaan Partners, told Quartz. For life and home insurance, Dickinson explained, much of the necessary data is already out there; it’s just a matter of aggregating and analyzing it. The lack of digital products, or ones that work well, is a turn off for younger customers, too. The idea is to simplify and digitize. For example, Next Insurance is trying to personalize and automate insurance for small businesses, a traditionally paper-based niche.

But capital is a major barrier to entry. A startup would need licenses in every state in the US, a time-consuming and expensive process. Also, companies would need to have money in order to pay out any potential claims.

Big insurance companies can be allies in this regard, through what’s known as a managing general agent relationship. In this scenario, the startup doesn’t have to hold the risk on its own balance sheet, essentially outsourcing it to a larger insurer. The startup can then focus on developing its product and acquiring young customers, which have proven difficult for traditional insurers to land.

While many startups are exploring this route, Schreiber says that he sees some issues with working with insurance giants. “We can’t build our company on top of 100 year old company,” he said. “We need to build it from scratch.”