Welcome to the first installment of the 2016 fast-food breakfast wars. After a brief period during which McDonald’s had the morning spotlight to itself, Taco Bell has stepped back into the fray with a pure value play: 10 breakfast items for $1 apiece.

Taco Bell on Thursday (Mar. 10) introduced a new nationwide “$1 Morning Value Menu.” The options include: a “mini skillet bowl” (a breakfast bowl of “fluffy” eggs, potatoes, cheese, and salsa), a “breakfast soft taco” (what it sounds like), and a “sausage flatbread quesadilla” (the flatbread is described as ”pillowy”). Taco Bell calls this menu revamp an “extension of the brand’s long-standing promise to deliver quality food at great value.”

“While dollar menus disappear across America, Taco Bell is continuing to reinvent breakfast with delicious and unique menu items only Taco Bell can provide,” says Marisa Thalberg, Taco Bell’s chief marketing officer, in an apparent jab at McDonald’s. The Golden Arches swapped out its dollar menu for a bundled “McPick 2” for $2 deal last November. Late last month, McDonald’s increased the price to $5.

Taco Bell last relaunched its breakfast menu in March 2014. The chain credited breakfast with causing same-store sales to rise during the 2014 third and fourth quarters. Taco Bell’s breakfast menu is available from 7am to 11am. Thalberg told the Wall Street Journal that there are no plans to go head-to-head with McDonald’s and offer breakfast all day. 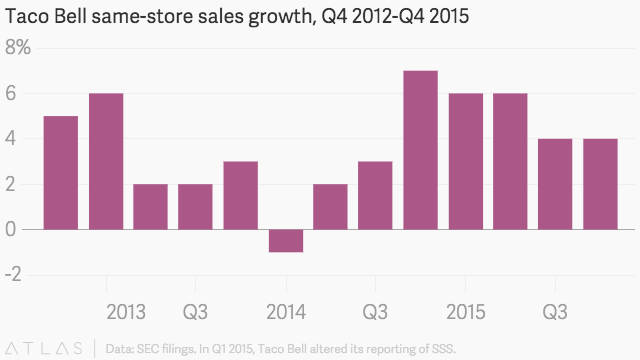 Breakfast is one area of fast food that’s still growing. Breakfast sales in the US have risen by about 5% a year from 2007 to 2012, while sales of other meals have remained effectively flat.

That growth has sparked a frenzy of breakfast innovation, especially in breakfast sandwiches.

The more creative assault has been in marketing, specifically from Taco Bell, which has gone after long-time breakfast leader McDonald’s with a series of snarky ads. In 2014, it launched its “Ronald McDonald” commercial, in which Taco Bell recruited real-life people named Ronald McDonald to declare their love for its then-new breakfast menu. A year later the Mexican food chain debuted  ”Routine Republic,” a thinly veiled parody of McDonald’s as a fast-food dystopia.

The $1 morning menu is certainly in that spirit.