The delivery space is now crowded with companies—DoorDash, Postmates, and Uber, to name a few. And a few months into 2016, Grubhub is doubling down on its delivery commitment. “I share in the excitement of the delivery space, especially as it applies to restaurants and takeout food,” Grubhub CEO Matt Maloney said on the company’s fourth-quarter conference call in February. 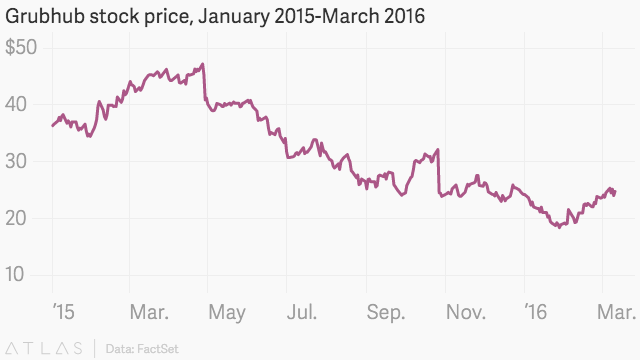 Maloney says Grubhub is “best positioned to win the lion’s share of the online food delivery market.” And it does indeed have some key advantages: Grubhub’s network of restaurants is already extensively developed, topping 40,000 in 2015. It also does huge volume, processing more than 240,000 “daily average grubs”—a funky metric for the average number of revenue-generating orders in a day—during the fourth quarter. It handles delivery for about 8% of that volume.

Even so, the real question is whether this is a fight Grubhub should be jumping into. The “delivery success story” that Maloney espoused for Silicon Valley looks less glamorous up close. DoorDash, which hires independent contractors to deliver food from restaurants, has struggled with expensive churn in those workers and was recently reported to have suffered a down round. Instacart, an on-demand grocery delivery service, has lately raised prices for consumers and cut rates for workers. Another problem is that customers seem unwilling to pay much for the convenience of delivery, which puts delivery companies that need to make their margins work in a tough place.

Grubhub, which saw its growth slow and stock price plummet in 2015, won’t be immune from these challenges. It’s chosen to go the independent contractor route, and its delivery pivot has not come cheaply so far. In the fourth quarter, Grubhub lost $5.5 million on delivery, which CFO Adam DeWitt described as “actually much improved compared to the third quarter” in percentage terms.

“We’re confident that once we get to a higher degree of scale, we will be able to generate enough revenue on the delivery component to completely offset delivery costs … while maintaining a reasonable cost to the end diner,” DeWitt told investors back in February.

Even if the “delivery success story” isn’t quite that, Grubhub’s best strategy may still be to stick it out and be the last man standing. It’s already the most established player, and handling delivery allows it to capitalize on that advantage: It gives Grubhub more control over the customer experience (i.e., the ability to ensure your takeout doesn’t come with an exploded packet of ketchup). It also helps Grubhub expand restaurant offerings, grow its “total addressable market,” and, in theory, increase customer retention.

All of which, the company hopes, should help it fend off the copycats.

Correction (Mar. 14): An earlier version of this post incorrectly stated that Grubhub decided to enter the delivery business as its stock was plummeting. In fact, the stock began falling a few months after Grubhub’s delivery announcement.