Finland gets praise for its progressive “open prisons,” where inmates circulate freely in the surrounding community during the day—working, studying, and shopping among the locals. This costs less to run and leads to lower reoffending rates than locking up criminals in the traditional manner.

The thing is, it also makes it pretty easy to escape. According to new statistics from the Council of Europe, Finland’s prisoners have the itchiest feet in Europe: 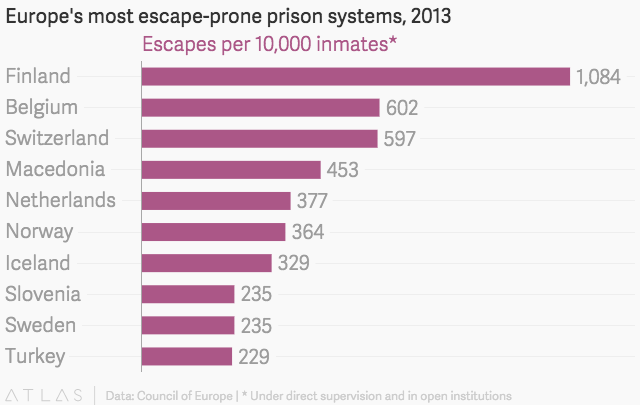 Around one in 10 Finnish convicts made a run for it in 2013, the latest data available, almost double the next-highest country, Belgium. This was mostly down to inmates absconding from open institutions or during temporary leave. But even under direct supervision, Finnish inmates were Europe’s most slippery —45 prisoners per 10,000 inmates escaped from closed prisons in 2013, more than second-ranked Switzerland, at 37.