Over 12 million Germans will pass judgement on chancellor Angela Merkel and her party during ”Super Sunday” state elections tomorrow (Mar. 12).

The three state elections will be a key litmus test of whether people still have faith in Merkel and her conservative Christian Democratic Union (CDU) since Germany opened its doors to 1.1 million refugees last year.

The CDU is hoping to win control of the government in two wealthy western states, Baden-Württemberg and Rheinland-Palatinate, and hold onto its position as the largest party in the eastern state of Saxony-Anhalt:

“Everybody who wants to support my refugee policy should vote for the CDU on March 13, and nobody else,” Merkel said in Baden-Württemberg last week. But outside the venue, a former CDU voter told Politico he had switched his allegiance to the AfD: “Seeing the crime this woman is committing, and how she is ignoring the opinion of the people, makes us fear for democracy.”

Founded as a eurosceptic party in 2013, the AfD switched to an anti-refugee platform as the crisis escalated, seeing its ratings shoot up as a result. Under the new leadership of Frauke Petry, who said in January that border guards should be able to shoot refugees, it won 13 % of votes in the central German state of Hesse last weekend, making it third-largest party behind the CDU and SPD. This was telling, as it showed the AfD’s appeal is expanding  beyond its core in poorer eastern states to the disgruntled middle class in other regions of Germany, which is bad news for Merkel.

But Timo Lochocki, a politics expert at the German Marshall Fund, believes the AfD’s foundation is flimsy. “The AfD is currently only attracting voters as they distrust Angela Merkel’s refugee policy,” he told Quartz. “If newspapers are going to write next month that her approach is working out, its prime campaign topic might become pointless.”

While the chancellor hasn’t wavered in her refusal to cap migrant numbers, the number of refugees registered in Germany last month was 61,000, compared with 91, 000 in January. Closing the Balkan route from Greece to Germany, a new agreement with Turkey to keep refugees in that country, and a bigger list of countries deemed safe for migrants to return to could further cut the numbers.

In fact, polls this month show that Merkel’s approval rating has jumped from recent lows, to back up above 50%. 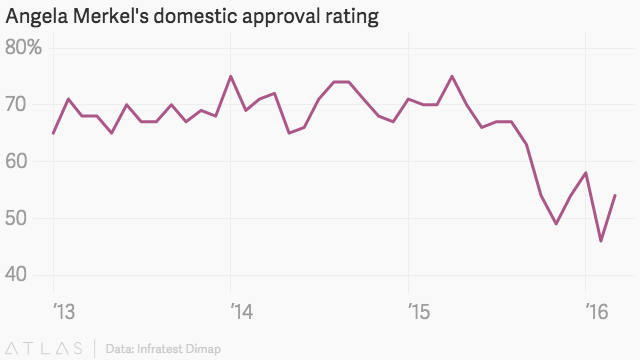 “The key questions for German voters is not why refugee numbers go down, but that they go down, and without closing the German borders,” said Lochocki. “To German voters, it will look like Merkel’s promises have materialized.”

But these promises will take time to materialize—time that Merkel doesn’t have before the vote tomorrow.