The average American household must solve a series of tricky financial problems. It needs to figure out how much to save, how to invest that money in increasingly volatile markets, and how much to spend in retirement. And it needs to make these decisions while weighing an abundance of conflicting advice that makes the rounds on a daily basis. No wonder more Americans are turning to professionals for help: 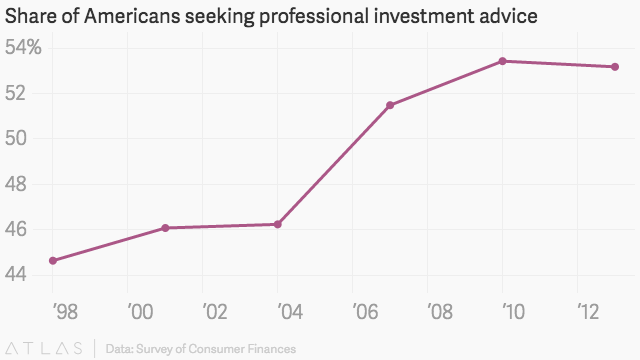 And no wonder regulators are taking a closer look at those doling out advice. A new study estimates one in 13 advisors has been disciplined for misconduct. The most common form of impropriety is the use of unsuitable investments, often including insurance or annuity products. White House economists are also concerned advisors are pushing high-fee mutual funds instead of low-cost index funds, which have been producing the same or better returns for less money. Why would that happen? Well, your advisor may not have an incentive to act in your best interest.

There are two kinds of financial advisors. There are commission-based advisors who get paid more if they invest your money in higher-fee investments. And then there are fee-only advisors* who get a percentage of your assets or a flat fee, regardless of how they invest your money. Fee-only advisors have a smaller share of the market, but their presence is growing thanks to better awareness and retiring boomers. They’re expected to make up 25% of the market by 2018, up from about 19% today. (*Full disclosure: I am a paid consultant to fee-only advisors on retirement investing strategies. I’ve deliberately only ever worked with fee-only advisors because of the conflict-of-interest problem.)

White House economists estimate that conflicts of interest among commission-based advisors cost Americans $17 billion a year. To correct that, those economists, along with senator Elizabeth Warren and the Department of Labor, would like to hold advisors to a fiduciary standard to act in clients’ best interests. The standard already applies to fee-only advisors and plan sponsors of any workplace pension. The thinking is that a law requiring advisors to put your needs ahead of theirs would lead to better advice. But I’m here to tell you that it won’t.

The problem is that “best interest” hasn’t been clearly defined. It could be growing clients’ wealth or providing them with a stable income in old age. I’ve written before that these two strategies require totally different asset allocations, and one could be preferable to the other, depending on the context. But the White House economists seem to define good advice as simply investing in low-cost index funds. However, in some cases high fees might buy you something valuable. For example, while some variable annuities are rip-0ffs, other fixed-rate annuities are sometimes worth their cost. After all, you are paying an insurance company to take on the risk that you’ll outlive your money, one you don’t want to bear.

I’d define good advice as a strategy that provides you with the same security people once had when their employer offered a traditional pension: one capable of paying you a predictable income in retirement. It is possible, but it takes an advisor who is able to create a strategy that fits your unique needs and risk appetite, and is both discerning about and open to new products and strategies. The fiduciary standard makes it hard for advisors to provide this service because it encourages them to avoid lawsuits, not provide good advice. When the standard is so vague, the easiest way to avoid being sued is to invest client money the same way every other advisor does. That way no one can claim anything irregular was done.

If you need evidence the fiduciary standard doesn’t work, look no further than the mediocre performance of your 401(k) plan. Whoever chose your investment options is a fiduciary, but odds are you still pay high fees. In 2012, only 23% of 401(k) plan assets were invested in low-fee index funds; instead most were still sitting in higher-cost mutual funds. And the fiduciary standard has led to a dearth of products designed to help people invest and spend their assets after they retire. A survey from AON Hewitt, a consultant and retirement-plan administrator, claims 78% of plan providers cite fiduciary concerns as a reason they won’t offer a retirement-income option such as an annuity or any draw-down strategy.

Something is rotten with advice and there is a real need for better regulation. Perhaps a fiduciary standard could work in the future, when the industry and regulators have clearly defined what constitutes good advice. Another alternative is the model adopted by the United Kingdom, which banned commission-based advisors in 2013. American regulators are hesitant to go that far because fee-based advisors tend to be more expensive (the UK ban made advice too expensive for poorer people). But technology, including automated advice, has the potential to make fee-only advisors cheaper in the future.

Retirement planning is an industry in desperate need of innovation and regulation, which are unfortunately often at odds with each other. That’s clearly the case with this ill-defined standard.