There’s a lot of talking going on in the oil world these days. Russia is talking to Saudi Arabia, both of them are talking to Qatar and Venezuela, and Venezuela in turn is talking to Mexico, Ecuador, and Colombia. All of this in service of doing something about global crude oil production, mainly freezing it in the hopes demand catches up with supply and everyone keeps their share of the market.

Despite oil prices falling Monday and Tuesday, it’s unlikely that Iran alone can sink oil prices further. Iran has been pledging to increase production since before its sanctions were lifted, but it’s still below pre-sanction levels and of course well below the 6 million barrels a day it produced in the mid-1970s. 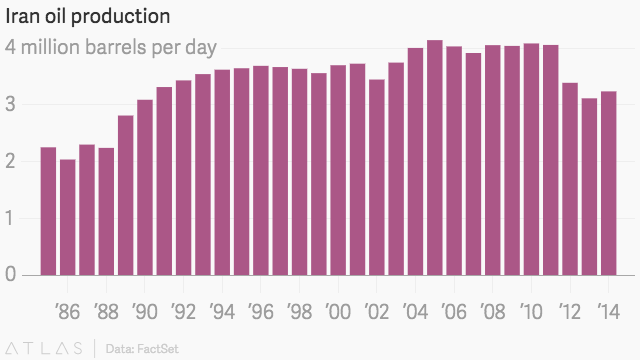 “So far they’ve overpromised and underdelivered,” said Phil Flynn, an analyst at PRICE Futures Group. Besides, the market has already priced in any increase in Iranian production, Flynn said.

What oil Iran is exporting isn’t finding easy buyers, particularly in Europe Reuters reports. The country has been having trouble adjusting to a world that has changed since it was more actively involved in the global oil trade:

But some former major buyers also cited Tehran’s unwillingness to loosen its selling terms from four years ago, and offer flexibility on pricing, despite the world having become oversupplied with oil and Iran’s European market share seized by Saudi Arabia, Russia and Iraq.

“Iran is not flexible with terms. They still impose very old-fashioned destination clauses telling you where you can and cannot take your crude,” said a senior oil trading executive, who asked not to be named due to the sensitivity of the issue.

“It was okay a decade ago but the world doesn’t look like this anymore.”

Nor is it entirely clear that Iran could actually produce the 4 million barrels it says it wants to.  The sector needs major investments to boost production. That explains why Iranian officials have eagerly welcomed much-needed oil investment (paywall). Although Iran needs as much as $200 billion, the funds have been slow to materialize.

Iran’s petro-machinations are worth watching, but the real cards in the oil game rest with its neighbor across the Persian Gulf, says James Nixon, an economist with Oxford Economics. It’s far more important to determine whether Saudi Arabia can continue to wield power in business of oil, he says. The country’s current campaign to freeze production is being seen by the market as the first step toward production cuts.

“The only thing that’s holding up oil prices is the idea that Saudi Arabia’s current policy is unsustainable,” he told Quartz. Eventually, cuts will cause prices to rise.