In late 2015, city water officials in Beverly Hills, California, sent letters to dozens of high-usage customers asking them to cut back. Predictably, they went to a number of high-profile individuals in the entertainment industry, including Amy Poehler and David Geffen.

According to The Los Angeles Times, which gained access to water bills for both, Poehler was charged more than $2,200 for water use at a Beverly Hills property, with usage between May 14 and July 14, 2015, exceeding a total of 170,000 gallons of water—roughly 2,786 gallons a day.

One-time media mogul David Geffen used an average of about 27,000 gallons of water a day between June 2 and August 2 of that same year or “roughly 60 times what an average Los Angeles family uses and about 9,000 gallons more per day than what Geffen was allowed,” the Times notes.

The average American family uses about 400 gallons of water a day, according to the US Environmental Protection Agency (EPA). The World Health Organization (WHO), meanwhile, recommends a minimum of 20 liters (5 gallons) per person per day—20 gallons for the average 4-person family, to take care of “basic hygiene needs and basic food hygiene”—which many in some of the world’s poorest, driest locales struggle to obtain. 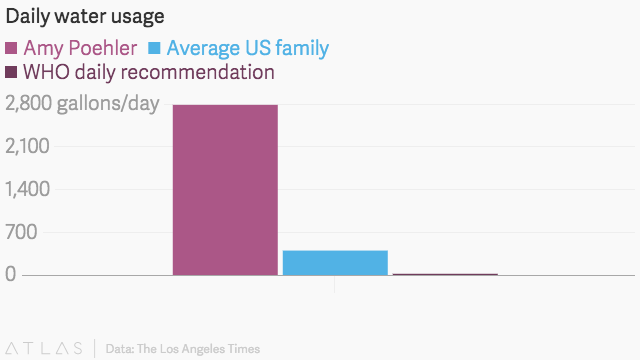