Drug prices are a hot topic in the US presidential election, with candidates on both sides of the aisle vowing to battle Big Pharma and bring down exorbitant prescription costs in the country. The problem is real, though: Over the last five years, the average price of branded prescription drugs in the US has skyrocketed (paywall).

Indexed branded-prescription drug prices rose 16% to $264.43 on average in 2015, which was about half the growth rate seen in 2014, according a report released Monday (Mar. 15) by Express Scripts, a company that negotiates with drugmakers on behalf of US health insurers and employers. Since 2011, prices have soared 98%. 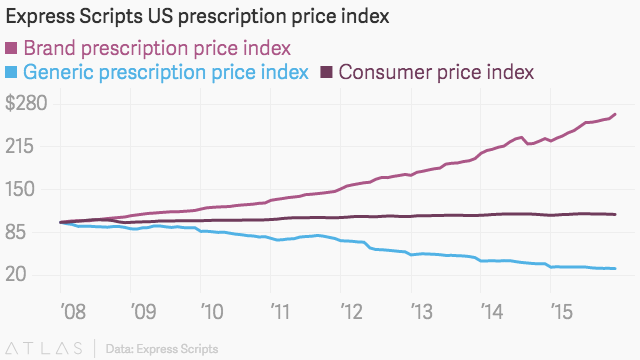 Part of the recent growth was driven by sizable price increases for a large swath of name-brand drugs. In 2015, one-third of branded medicines had annual price increases of at least 20% and more than 100 doubled in price, according to Express Scripts.

Specialty drugs, which are used to treat diseases such as cancer, multiple sclerosis, and inflammatory conditions like rheumatoid arthritis, had the largest prices increases, Express Scripts found. They were used by 1% to 2% of the US population last year, but accounted for 37% of the nation’s drug spend. The vast majority of these brand-name specialty prescriptions don’t have direct competitors in the US marketplace, which allows the drug makers to set the price.

“Captive pharmacy arrangements” that push products by a single manufacturer and ”ongoing scheming by compounding pharmacies,” which create tailored medicines for individual patients, are also contributing to the rise in drug costs, the report argues.

The growing cost of name-brand pharmaceuticals in developed countries like the US is driving up the world’s overall drug bill. By 2020, global spending on medicines is expected to rise to $1.4 trillion. And the US will be responsible for about 40% of that total.

Generic drug prices, meanwhile, have tumbled in the country thanks to the highly-competitive marketplace for generics. Prices fell to a recent low of $29.73, on an indexed basis, in December 2015. However, the rate of decline in this category is slowing, as drug makers jack up prices on old generics that no longer have competition. Turing Pharmaceuticals, for example, hiked up the price of the generic drug Daraprim—often prescribed to AIDS patients—by 5,500% to $750 a tablet from $13.50 in 2015.