Valeant, a Canadian pharmaceutical company whose drug pricing and other practices are the subject of an investigation by US prosecutors, plunged nearly 50% on Tuesday, after holding a long-awaited conference call.

During the call the company slashed revenue guidance for the current quarter and warned of a potential default tied to its yet-to-be-filed annual report, which was due at the end of February. 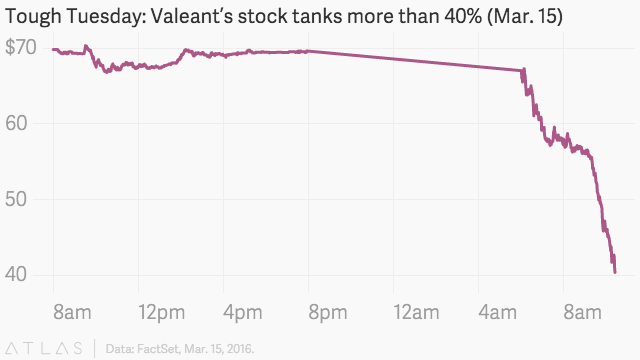 The company postponed filing the report on Feb. 28,  right before the drugmaker disclosed that it was under investigation by the Securities and Exchange Commission. (Valeant is also being investigated US attorneys offices for Massachusetts and the Southern District of New York.) If Valeant’s annual report isn’t filed by March 30, the company warned in its call today, it could breach the rules of credit and bond agreements, resulting in defaults.

“Our business is not operating on all cylinders, but we are committed to getting it back on track,” Valeant CEO Michael Pearson told listeners to the call. Pearson recently returned from medical leave.

The last several months have marked a stunning fall from grace for Valeant. The company’s shares had become favorite holdings of hedge funds in recent years. And from the start of 2013 to Aug. 5, 2015, when the shares peaked at $262.52, the stock soared 339%. 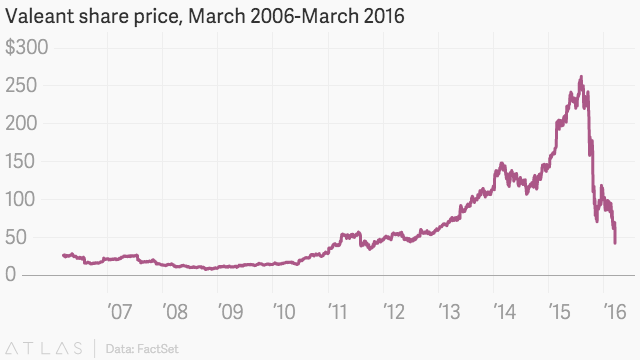 Since then, Valeant became a lightning rod for criticism, after a Wall Street Journal series highlighted business practices including buying the rights to treatments and then quickly and substantially raising prices. The series led to political scrutiny, including Congressional inquiries. Democratic candidate Hillary Clinton mentioned Valeant by name during a campaign appearance, accusing the company of “predatory pricing.”

Late last month, the company said it was under investigation by the SEC, which had requested information about Valeant’s relationship to a Philidor Rx Services, which distributed some of Valeant’s high-priced drugs.