America is in the throes of a drug epidemic: According to the Centers for Disease Control (CDC) opioid related deaths (heroin and prescription drugs) quadrupled between 1999 and 2014. 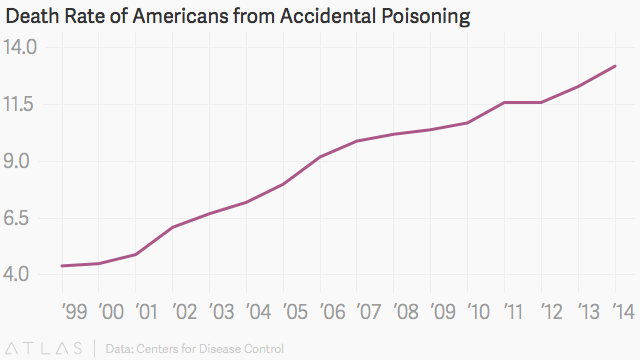 This epidemic is unique because it is taking the lives of Americans of all ages, particularly middle-aged white women. A common explanation for the epidemic is economic conditions—the hollowing out of the middle class and economic malaise has left white Americans so distressed they are turning to opioids, and Donald Trump. But, in both cases, that argument is too simplistic to explain a deeper issue.

A new paper studies drug use and addiction in America between 2002 and 2013. The authors looked at how different state’s unemployment rates correlate with use and addiction of different types of drugs and alcohol. They estimate a bad economy means fewer people drink and more take hallucinogens (mostly LSD and ecstasy), but there is no relationship between other kinds of drug taking and unemployment. The economists did find higher unemployment is associated with more dependency on alcohol, analgesics, and hallucinogens. A bad economy won’t increase consumption, but among those who do consume certain drugs a bad economy is associated with an addiction problem. There was no relationship between economic conditions and use or dependence on marijuana, meth, or heroin. It is not clear why certain drug problems are more sensitive economic conditions. It could be because some of the economy-sensitive drugs, alcohol and prescription drugs, are consumed by a wider population and have less stigma. The economists did not observe anything special about the last recession. It was severe, but did not change the relationship between drugs and the economy.

Their results suggest the drug epidemic isn’t just about economics. The paper estimates the relationship between unemployment and drug dependency only holds for men; women did not have a significant correlation. Yet, the the spike in drug deaths was larger for women. The opioid epidemic has also hit the white communities hardest, but minorities had a rougher time during the recession—facing higher unemployment rates and declines in wealth.

Karin Mack of the CDC attributes the trends to prescription practices. For generations Americans suffered through pain. But starting in the 1990s, the medical community changed how it dealt with pain management. In 1995, the FDA approved oxycontin for moderate to severe pain and in 1998 the Federation of State Medical Boards Model Pain Policy was rewritten, stating prescription drugs to treat pain is sometimes “essential.” Since then the number of opioids sold in America grew four-hold, leading to more use and eventually abuse. The CDC estimates in 2012, health care providers wrote 259 million prescriptions for painkillers. That’s enough for every American adult to have a bottle of pills.

The new study only looks at recessions and drug use, not long term economic trends. Structural economic changes may explain why the increase in drug deaths has been larger in rural areas, which have faced sharper economic declines. But structural changes unfold slowly, suggesting if there is an economic relationship, it came from an interaction with other factors, most likely the change in how we treat pain, doctors who are too promiscuous in giving out pain killers, and cultural changes.