Back in January, Chipotle predicted it was in for a rough year.

A few months down the road, Hartung has a new admission: “It’s worse than I thought.”

The bleak characterization came during Chipotle’s presentation at the Bank of America Merrill Lynch consumer retail and tech conference on Wednesday, as executives discussed their efforts to recover from a spate of health scares that battered sales and investor confidence in late 2015. “The costs that crept in … were higher than I thought,” Hartung said. “We have more food waste than I thought. A lot of that is irregular sales patterns.” 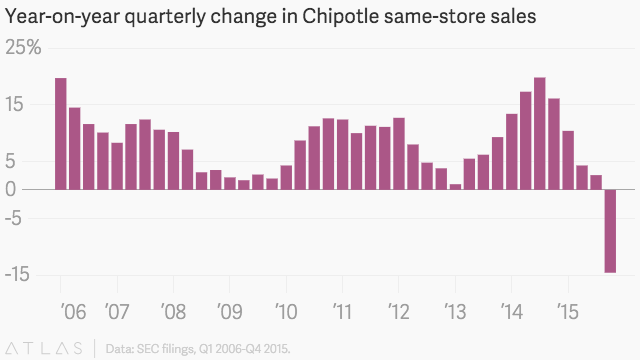 Chipotle disclosed in a securities filing yesterday that sales at restaurants open at least 13 months fell 26.1% in February. It also forecast a loss of $1 per share in the first quarter, a dramatic shift from the $3.88 per share profit Chipotle made in the same period a year earlier and its first quarterly loss as a public company. Chipotle’s same-store sales dropped 14.6% during the fourth quarter of 2015.

Shares of Chipotle were down about 2% in midday trading. 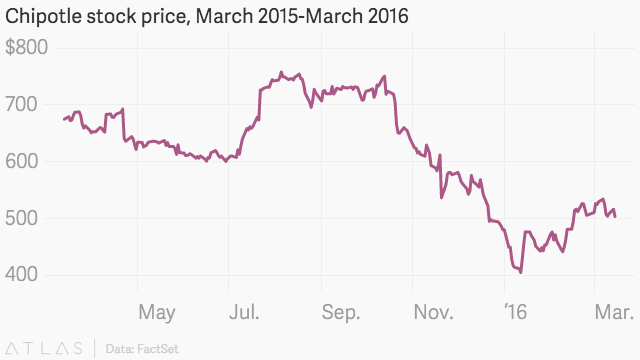 The company’s main bright spot last month was its free burrito promotion, which coincided with an all-staff meeting on food safety.  ”That was our first test to see how much people really wanted to come back to Chipotle,” said Mark Crumpacker, the chain’s chief creative and development officer. “We fully expected that to go viral, which it did.” Chipotle assumed that 2.5 million people would request a coupon for a free burrito, he said, and 5.3 million actually did. Two-thirds of those coupons were redeemed, leading to ”a very nice lift in transactions.”

Tougher to say is whether the momentum Chipotle gained from that promo will be enough to speed its recovery along. Chipotle’s marketing for the current and coming quarters include billboards (sample slogan: “culinary monsterpiece”), direct mail offers (21 million in total), and, likely, more free burrito promotions.

But the brand perception problems created by its highly publicized E. coli and norovirus outbreaks will take more than advertising to fix. That was glaringly apparent last week, when reports of another norovirus incident near Boston and the temporary closure of one Chipotle location caused weekly same-store sales to sink 27.3%. (In a strange side story, Chipotle said at today’s conference that people only learned about the incident because the parents of a worker who called in sick, a high school student, then called the media.)

What do Chipotle customers really need to see before they come back? It’s the crucial question, and the one that executives still don’t have a particularly encouraging answer to.

“The most compelling thing is time,” Crumpacker said. “They just want to give it a little bit of time.”

Correction (Mar. 16): The headline of this post initially misattributed the phrase “even worse” to Chipotle. It was just “worse.”