Thursday (Mar. 17) is St. Patrick’s Day—when the Irish and Irish at heart gather to celebrate the culture of the Emerald Isle. Oh, who am I kidding? It’s mainly an excuse for people to march in parades, wear green, and down way too much green beer and Guinness. With 34.5 million people of Irish descent living in the US (7.5 times Ireland’s population), the country may be partying the hardest.

People in the US plan to spend $4.4 billion during St. Patrick’s Day this year on things like food and beverages, which make up the majority of planned spending, festive apparel and accessories, decorations, and candy, according to a National Retail Federation survey.

Americans also love to shop while they drink so there’s a multiplier effect to that number. About 78% of people in the US said they’ve made spontaneous, non-alcoholic purchases while intoxicated, a recent survey found.

Shoes and apparel are the most popular booze-fueled buys, personal-finance site Finder.com found, according to their survey of more than 3,100 US men and women. 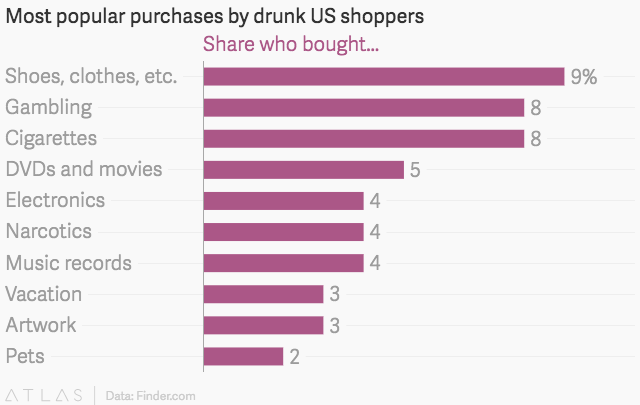 Maybe their feet may hurt. Or perhaps a shoe was lost on a pub crawl. Whatever the reason, drunk Americans splurge most on apparel and accessories when intoxicated because it makes them feel good.

“When people start drinking, they lose their inhibition and good judgment, and blow-outs tend to be on items that make them feel good,” Finder.com CEO Fred Schebesta told Quartz. “Spending on clothing and shoes is often not a need but a want, and we give into temptation more often when drunk.”

That would also explain why men and women in the US spend money on vices like gambling, cigarettes, and drugs when they’re under the influence. 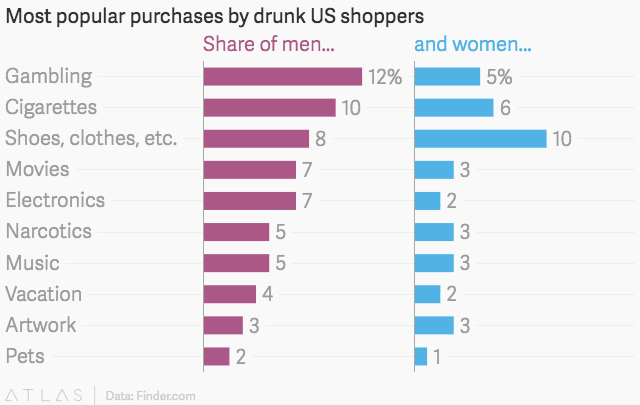 Men shell out four times as much as women on spontaneous purchases while imbibing.  The men surveyed who admitted to buying things when they were drunk said they spent an average of $314 a week, while the women surveyed spent just $67, according to the Finder.com poll.

The men also drank far more than the women, lowering their inhibitions further. The nearly 1,500 US men surveyed by Finder.com said they drink an average of 387 alcoholic beverages a year, compared to an average of 192 among the 1,600 women surveyed.