Tiffany & Co. wants all the US dollars it can get, but the currency has turned out to be an unforgiving master since it gained strength amid declines of key foreign currencies across the globe.

In the US, Tiffany is one example of how businesses that rely on purchases by foreign tourists continue to feel pain from the decline of the euro and yen against the dollar in late 2014.  Some 25% of Tiffany’s US sales rely on those tourists. With their spending power crimped by the stronger euro, foreigners visiting the US are buying less bling. That’s led to shrinkage in the company’s sales, particularly in New York.

Take a look at the euro’s steep plunge against the dollar: 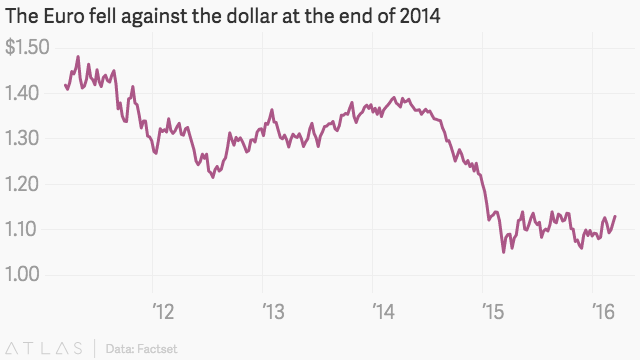 Now check out how that took a bite out of Tiffany’s US sales: 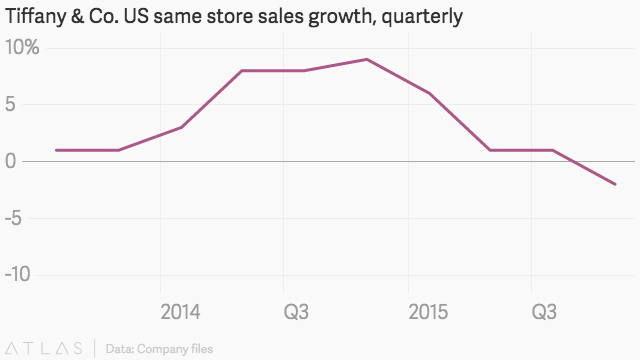 Some of that loss was recovered by American tourists outside the US who were able to enjoy the stronger dollar, but there has been no way to make up for the loss considering how important the US market is to Tiffany’s overall business. In 2014, for instance, the Americas made up about 48% of worldwide sales, according to the company. Europe, by comparison, accounted for 12%. It’s an issue that continues to crop up during company calls with investors. Analysts at Deutsche Bank say some of those concerns may abate in the mid-term, as the dollar is beginning to stabilize against other currencies on a year-on-year basis. It’s still going to be a tough year for the company, though, they said.

It doesn’t help that luxury brands are losing their sheen for many consumers around the world. From 2014 to 2015, the top 10 luxury brands—including Prada, Gucci and Cartier—lost 6% in combined brand value, or about $7 billion. But there are also questions about the very nature of the Tiffany’s customer, and whether that person and their habits are shifting.

“Some jewelry retailers with more affordable price points are outperforming,” said analysts with Deutsche Bank in a March 15 report, “opening questions on whether and how the traditional Tiffany customer might have evolved over the past few years.”