Drivers logged into Uber’s app can be doing one of three things: picking up a passenger, completing a trip, or waiting for a fare. In New York, where Uber regularly releases data for how the average UberX driver spends an hour on its platform, on-trip time has risen steadily over the last four years, while idle time has fallen. 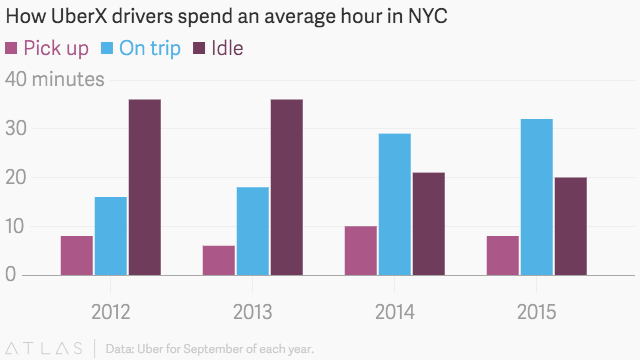 Uber isn’t just competing against itself on efficiency—it’s also taking on taxis. A new paper from Princeton economists Judd Cramer and Alan Krueger says Uber’s US drivers spend “a significantly higher fraction of their time” with passengers in their car than do taxi drivers. Cramer and Krueger analyzed data from five cities: Boston, Los Angeles, New York, San Francisco, and Seattle. Across all five, UberX drivers spend 38% more time with passengers in the cars than taxi drivers. 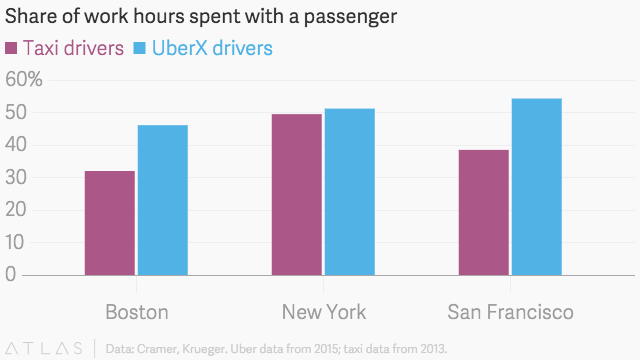 The paper’s conclusion comes with two big caveats. First, it compares Uber data from 2015 to taxi data from (mostly) 2013. Second, Krueger was commissioned by Uber to co-author a rather favorable report on driver earnings and satisfaction in January 2015. He says he has “no ongoing relationship” with Uber.

Cramer and Krueger believe Uber drivers spend more time with passengers because the company’s algorithm, scale, and surge pricing encourage efficiency, whereas local taxi regulations hinder it. Unmentioned in the paper is Uber’s practice of encouraging drivers to accept at least 80% of trips “to retain your account status.” Uber in the past has suspended drivers when their acceptance rates fall too low.