Whether you work in a cubicle, café, or corner office.

Ever feel like you’ve gone above and beyond what your job required? You’re not alone, especially if you’re an American. Nearly 11% of US workers overestimate how productive they are relative to their compatriots, according to a survey of more than 6,000 respondents in 14 countries by Qualtrics, a market research platform.

People who think they’re doing better than they are suffer from “the Lake Wobegon effect,” named after a fictional town from a long-running American radio show.  Lake Wobegon was conceived as a place where “all the women are strong, all the men are good looking, and all the children are above average,” which speaks to the human tendency to overestimate ourselves. The same tendency is also called “self-serving bias” or “illusory superiority.”

Compared to Americans, Italians and New Zealanders only slightly over-stated their productivity at work compared to their fellow citizens. The measure was derived by first asking respondents what proportion of their individual work days were productive, and then asking them to estimate the same proportion of productivity for their countrymen. The gap between the two is shown in the chart below. 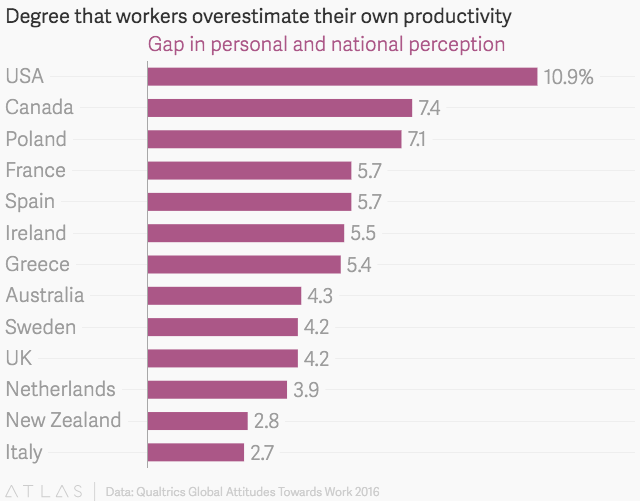 Why do Americans think they’re so much better than their fellows at work?  It’s difficult to say, Qualtrics’ global insights head Mike Maughan told Quartz, but it could be an overhang from the financial crisis of 2008. “US workers may feel even more challenged, with fewer and fewer people being asked to do more and more work,” he said. (Americans also claim they spend the least time on personal social media at work, clocking in at 14 minutes compared to the 24 minutes Greeks say they spend daily.)

This does not mean American’s aren’t happy at work. They reported the second-highest proportion of workers who said they were “extremely satisfied” with their work-life balance, just behind the French and ahead of Germans. “It doesn’t mean they’re the most satisfied with their jobs,” Maughan says of Americans, Germans and French workers, but “even if you work long hours, if you enjoy what you do, it tends to mitigate problems with work-life balance.”