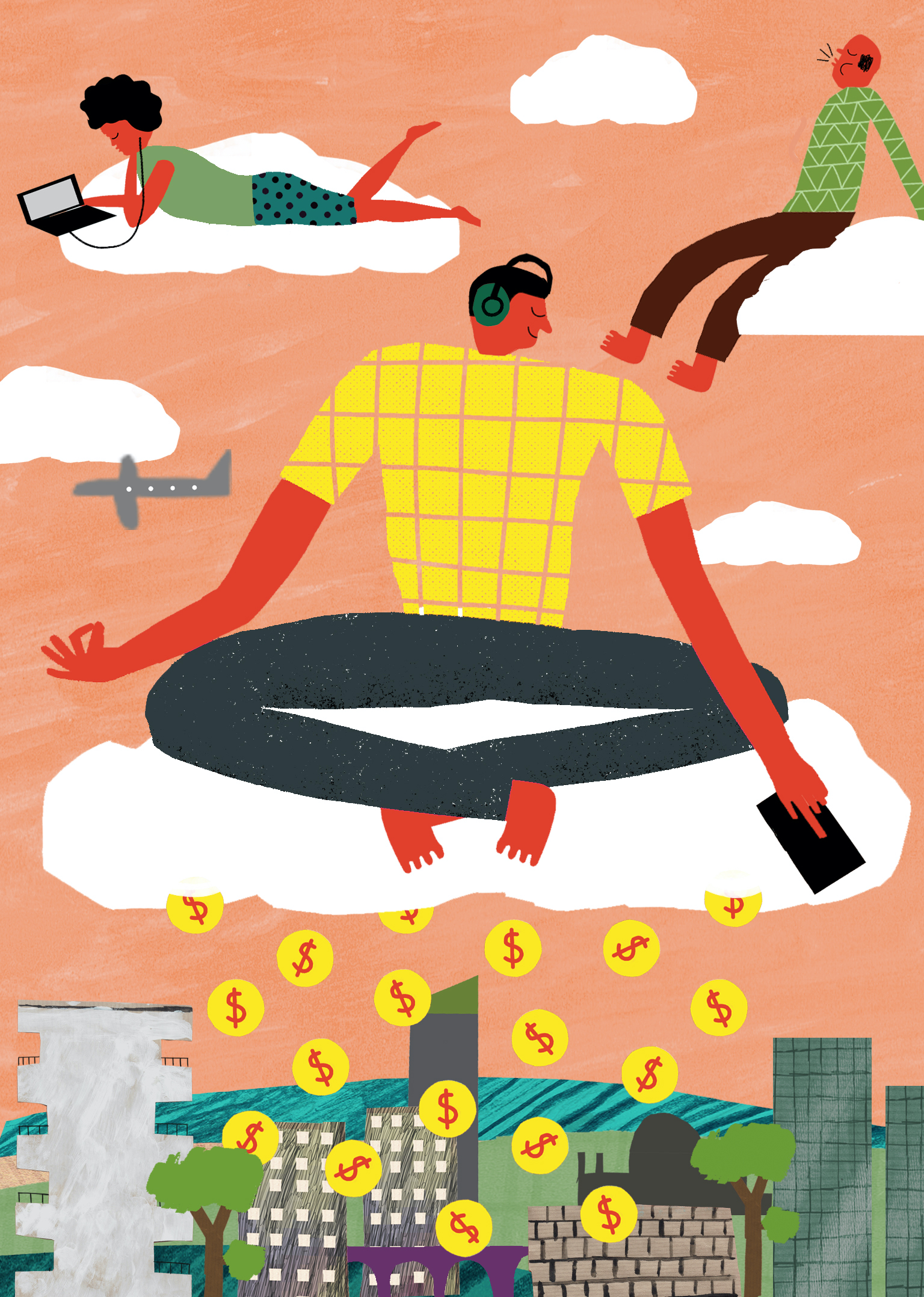 The business of mindfulness

Mindfulness apps are booming as stressed-out people tune in for help coping.

It’s early days in the new US presidency, but Joe Biden could hardly have presented a cleaner break from his predecessor on climate change.

On his first day in office, Biden signed an executive order for the US to rejoin the Paris Agreement, followed by another that revokes the permit for the Keystone XL oil pipeline and directs all federal agencies to “immediately review and take appropriate action to address” at least 100 Donald Trump-era policies or regulations that are damaging to the environment or public health.

Biden’s administration followed that up by announcing a who’s-who of progressive thinkers joining the Department of Energy, including positions focused on environmental justice and niche but essential technologies like carbon capture. He also re-established a panel tasked with calculating the “social cost of carbon,” a metric used to approximate climate damage that is essential for developing new regulations. And John Kerry, the new special climate envoy, has already set goals for global renewable energy deployment and reforestation.

Biden’s whole-of-government approach to climate change means that more of his agenda is likely to succeed, and faster, than Barack Obama’s, which rested mostly on a few flagship initiatives. But with a more conservative Supreme Court, the inevitable legal challenges from fossil fuel industry groups, and a pandemic recovery that will be powered to some extent by oil and gas, Biden’s battle is still uphill.

Still, one thing is clear: Trump’s damaging climate legacy is already going up in smoke. And with the US reasserting its climate credibility on the global stage, big emitters like China and Brazil will find it harder to wriggle out of making stronger carbon commitments.

“Pretty much everything [Trump] did will ultimately be swept away,” says Dan Lashof, US director for the World Resources Institute. “The biggest problem is that we lost four years, and there’s a lot of catching up to do.” —Tim McDonnell

There’s gold in them thar heels. What’s more precious than gold? A new pair of 1460 Dr. Martens. Since 1960 when the humble boot was created as footwear for the working class, its price has appreciated twelvefold, more than double the rate of gold. John Detrixhe explores Dr. Martens’ journey from the feet of factory workers to those of Instagram influencers as it prepares for its highly anticipated IPO on the London Stock Exchange. —Michael Coren, senior reporter

Make Hong Kong great again. Throughout Hong Kong’s democracy movement, many activists cheered on Donald Trump, who they saw as being tough on China. That irony was laid bare on Jan. 6, when an attack on the US Capitol—protesting the results of a democratic election—stirred support in Hong Kong, where China last year took a fair election off the table. In this thoughtful look at the complexities of comparing domestic politics, Mary Hui raises the question: How does a movement resisting authoritarian rule justify advocating for a political figure with deeply authoritarian instincts? —Kira Bindrim, executive editor

The best of times, the worst of times. The Covid-19 pandemic is often called a “great equalizer.” But when the world looks back at how India fared in 2020, it will be hard to ignore how it was a year when economic inequality became starker than ever before. In this story, Manavi Kapur highlights how India’s rich, most notably Mukesh Ambani, used the pandemic as an opportunity to create more wealth, while the poor struggled to fight hunger, with 10 million migrant workers making arduous journeys on foot. —Itika Sharma Punit, Quartz India editor

Hanging by a thread. Ethiopia’s rising garment industry was supposed to help transform its agricultural economy into a prosperous manufacturing force. But it now faces an uncertain future as fighting fueled by ethnic conflict roils the country’s Tigray region. Dorothée Baumann-Pauly, who studied Ethiopia’s garment industry in 2019, examines how the violence threatens to dash the country’s hopes of turning into a global clothing producer and outlines how Ethiopia might keep it from being derailed. —Marc Bain, fashion reporter

Vaccination dissuasion. At the beginning of the pandemic, China generated soft power for itself by sending out masks and personal protective equipment across the globe. Now the tables have turned: In an effort to bolster its own Covid-19 vaccines, China’s state-run media has been casting doubt on the safety of shots from the US’s Pfizer and Germany’s BioNTech, Mary Hui reports. As poorer countries seek to bring in vaccines from any source they can get, China dissuading them from certain vaccines may be the most dangerous pandemic misinformation yet. —Katherine Ellen Foley, science and health reporter

One membership thing that made us 🧘‍♂️

Feeling stressed out about the world? There’s an app for that—actually it’s more like thousands of apps—catering to needs like starting a meditation practice, moving your body, focusing better, or hearing a celebrity read you a bedtime story. Business is booming as stressed-out people seek mindfulness from their phones, in their cars, or at work. Read our guide on the business of mindfulness.

Our newest pandemic hero. Dry ice is a bit of a misnomer—although it is indeed not wet, it’s also not ice. Rather, it’s the solid form of carbon dioxide, and it has the ability to keep things like vaccines, say, at very, very cold temperatures. From a commodity standpoint, it’s never been hotter, and though there’s no word of a shortage yet, the fear of running out of the spooky stuff lurks in the minds of manufacturers and public health officials. The Quartz Weekly Obsession has a very cool read for you.

Four things from elsewhere that made us smarter

The GOP’s post-Trump rebrand. How will the party of Lincoln account and atone for its complicity in enabling a dangerous and corrupt president for four years? Pretend it never did, writes McKay Coppins for the Atlantic. With a few exceptions among the conscientious objectors or the MAGA diehards, “for the majority of GOP officials, apparatchiks, and commentators who sacrificed their dignity at the altar of Trump, a collective case of amnesia seems destined to set in the moment he leaves office.” —Annabelle Timsit, geopolitics reporter

Life beyond Earth. For many months the news on our planet has been exhausting. Reading about ‘Oumuamua, improbably but not impossibly a solar-powered, city-block-wide, fabric-thin sail of an alien spacecraft, accelerating toward us four years ago, I felt my mind open up. In the New Yorker, Elizabeth Kolbert’s account of the controversy the UFO sparked in the field of astrophysics is a good reminder that truth and progress sometimes require us to risk being wildly wrong. —Katherine Bell, editor in chief

Hanging Qs. As US president Joe Biden was sworn into office on Jan. 20, one group was particularly outraged by the routine civility of the inauguration: followers of QAnon, a right-wing conspiracy theory propagator. Without Trump’s tweets to guide them and major mainstream conservatives easing off the vitriol, the community has started to implode, write Tina Nguyen and Mark Scott for Politico. As more right-wing leaders call for respect for the current president, regardless of his views, it’s not clear which direction conspiracists will take from here. —Katherine Ellen Foley, science and health reporter

Keeping mum. If I’m being honest, my personal pandemic experience has often been nothing short of glorious. An overscheduled person in my pre-Covid life, I have relished the luxurious stretches of time with my little family. Writing for the New York Times, Merissa Nathan Gerson tells the story of a lockdown that braided together herself, her mother, and her community into something beautiful and lasting. (Still, it’d be lovely to have plans once in a while.) —Susan Howson, email editor

One thing that kept us entertained

It’s international heist season. Netflix’s new French-language series Lupin is the perfect escapist binge this weekend to remind you adventure still exists in the world. Omar Sy plays a gentleman thief—imagine Dana Carvey in The Master of Disguise, except with the charm of James Bond—out for revenge against the powerful French family responsible for his father’s death. The manageable five episodes fly by, as our thief’s schemes get progressively more treacherous the closer he gets to the truth about his father’s demise. —Adam Epstein, entertainment reporter

If you need more content to binge, sit back and enjoy Quartz’s latest.