Africans are getting richer.

In their latest look at Africa’s monied class, the research firm New World Wealth reveals that there are 163,000 millionaires across the continent, that is, people with assets worth at least $1 million. This millionaire class boasts a combined wealth of US$670 billion, says New World. That’s more than the GDP of Nigeria and Kenya combined, two of Africa’s big economies. And where are all these rich people? Most of them are in South Africa, it seems. 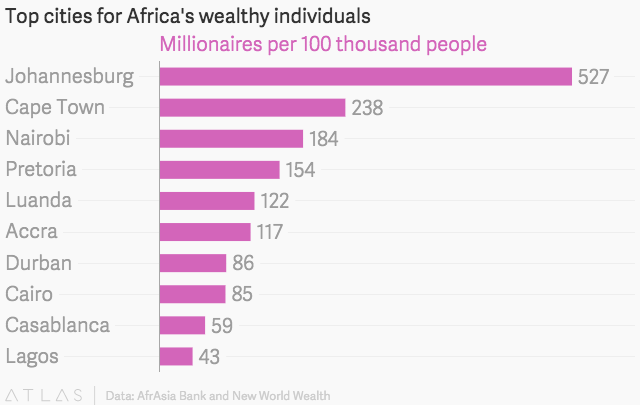 The rapid growth of African cities is helping to attract and support the entrepreneurs who are generating a lot of this wealth said Colin Grieve, chief representative officer at AfrAsia Bank, the co-producer of the report said in a statement.

And the number of these wealthy individuals is expected to grow. In the next decade, it is forecast Accra and Nairobi will almost double the number of those with a $1 million or more in assets, emphasizing the notion that Africa’s growth is generating wealth.

The question, however, is whether this new found wealth is helping to lift people out of poverty. Evidence suggests that it is limited only to the few. Take for example, GDP growth. Africa’s forecast for this year is expected to be 4.4%. But per capita growth is a mere 1.7%, according to the World Bank data. 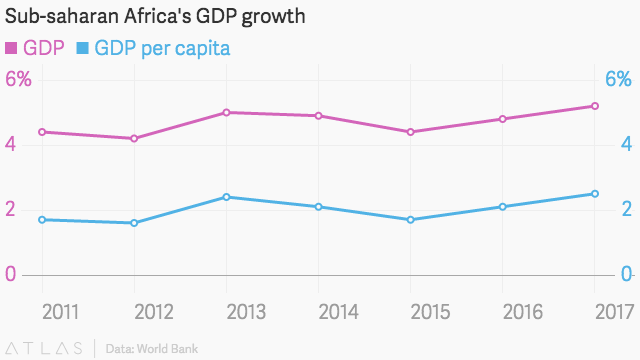 At the moment, one out of almost two Africans lives in poverty. In fact, despite this sustained growth, “more people are likely living on less than $1.25 a day in Sub-Saharan Africa today than at the turn of the millennium—an estimated 413 million in 2010 compared with 376 million in 1999,” the World Bank contends (pdf).

And even those who rise to wealthy status, their social mobility path is narrowly limited to those in positions of influence. “The bulk of poor people that become millionaires in Africa tend to be political figures as many move from politics into business.”

There are still reasons for optimism. The rate of poverty is estimated to fall to between 16% and 30% by 2030, says the World Bank. Nevertheless, the same report also points out by 2030 most of the world’s poor will be living in Africa. So while it is encouraging to see the rise of the millionaire class, the fact that the majority of the continent is still mired in poverty is a sober reminder that it is too soon to celebrate “Africa’s rise.”