Christo Wiese, the South African businessman behind Africa’s largest retailer, Shoprite, has his sights on entering the grocery sector in Britain through a possible acquisition. It would  be the latest in a string of retail investments in the country Napoleon Bonaparte famously described as “a nation of shopkeepers.”

British paper The Telegraph argues Morrisons might be a perfect fit for Wiese, since it resonated with Shoprite’s ethos of delivering the best possible value for the shopper by selling core food items, placing it competitively amongst discounter stores. 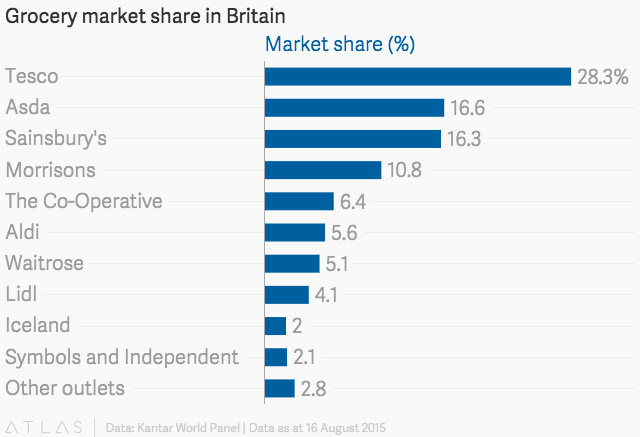 Britain’s big four supermarket chains—Tesco, Asda, Sainbury’s and Morrisons—have been experiencing tough market conditions in the UK. The four big supermarket chains have had to contend with the UK’s declining consumer spending, as well as a price war driven by discounter chains, such as Aldi and Lidl, who offer a smaller range of products at lower prices.

Despite this, Wiese seems confident that he can replicate his success from Africa’s retail market into the UK.

“The UK is extremely competitive but I can assure you it is as competitive in South Africa, if not more. We South Africans find it very easy to do business in the UK; it is similar, and it has the same challenges,” said Wiese speaking to the Telegraph.

Wiese’s Shoprite has since expanded into 15 other African countries, now with 189 stores, and 35 stores planned for the next 20 months–cementing its standing as Africa’s retail giant. Shoprite’s retail success on the African continent is largely due to its ability to play close attention to cater for the different tastes and income levels across the continent, as well as its focus on adaptability: operating stores with lower overheads, in the attempt to provide basic food items at lower prices, and developing distribution models best suited for the context in which it operates, as we have previously reported.

Entering Britain’s competitive grocery shop market won’t be Wiese’s first foray into the United Kingdom’s business sector. In April this year, Wiese acquired an 80% stake in Richard Branson’s gym chain, Virgin Active for $ 1 billion, he further went on to acquire a 90% stake in the UK-based high-street retailer, New Look for $1.23 billion. Wiese also launched a low-cost clothing chain, Pep and Co, in the UK this year—by opening 50 stores that will focus on discount fashion for children for young mothers.