You can receive this weekly brief, and more from Quartz Africa, by signing up for free here

Five stories from this week

Witness the pride and elegance of West African photo portraits from the past 100 years Professional photographers were taking photos for elite families all along the Atlantic coast as early as the 1880s. In many cases, the results were striking.

How a public bus system in Johannesburg saved South Africa $890 million How the Rea Vaya bus system saved the city close to a billion dollars by reducing travel time, improving road safety, and cutting down on carbon emissions.

The most promising retail markets in Africa are in countries people rarely talk about Turns out countries like Gabon, Angola and Botswana are much better bets for retail investors than some of their larger well-served neighbors.

Smile, the pan-African wireless ISP, has raised $365 million to expand its network Three years after launching Africa’s first 4G LTE services in Tanzania, Uganda and Nigeria, Smile Telecoms has completed one of the largest capital raises by any African telco.

A $1,000 wheelbarrow has become a symbol of Kenya’s rampant government corruption Residents of Bungoma county in western Kenya are in uproar over a set of 10 wheelbarrows that cost 1.09 million Kenyan shillings each, or about $10,300, in taxpayer money.

My life in a building: A chapel from the soil Al Jazeera’s series looks at an iconic landmark in the Nigerian city of Ibadan and the little-known 79-year old designer behind it, Demas Nwoko.

Nigeria’s young authors are not always ‘heirs’ to their literary forebears Chigozie Obioma’s Man Booker Prize nomination for The Fishermen and Chimamanda Ngozi Adichie’s nomination for Purple Hibiscus in 2004 highlights similarities between Obioma and Adichie’s backgrounds. And those similarities are worth noting, writes Tiziana Morosetti for The Conversation.

Chart of the Week 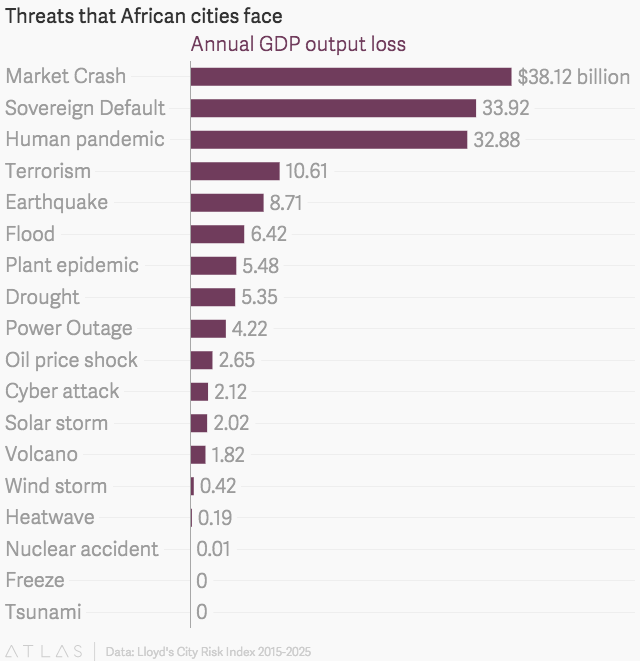 This week, keep an eye on

Follow the livestream here from 4pm Nairobi time (9am ET) on Monday. You can also follow live tweets from @qzafrica and @qz with some of the best insights from our talks.