One way of getting more people online would be to make the internet more linguistically diverse.  As Quartz reported last November, several of the world’s biggest tech companies have been expanding the number of languages in which they offer their services. At the end of last year, Google Translate added 10 new Asian and African languages, like Sesotho and Kazakh. 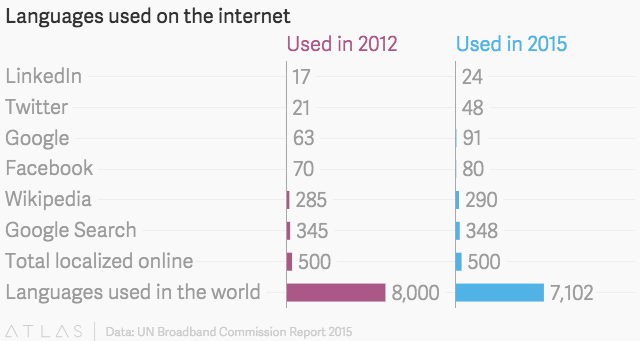 According to Ethnologue, 22% (1,531) of the world’s living languages are “in trouble”—meaning they’re losing speakers—while 13% (916) are “dying,” meaning it’s no longer possible to transmit these languages to the next generation.

If the number of languages in use online has indeed reached a plateau at 500, that would be roughly in line with the prediction of a 2013 research article (pdf), “Digital Language Death”, by András Kornai, a Hungarian mathematical linguist. Kornai estimated that less than 5% of the world’s languages would be able to survive online.

Languages need to function digitally for them to live on the web—such as through texting and email. For the many living languages that have few or no written records, it is hard even to develop such basics as online text editing tools. But, Kornai argued, even some relatively robust languages may not make it in the online world—such as Piedmontese, an Italian dialect with 2-3 million speakers but “without any significant digital presence.”

A lot depends on how essential a written form is to the people who speak it. If it’s their only or main means of communication, they are likelier to make the effort. Overall, Kornai writes, “the chances of digital survival for those languages that participate in widespread bilingualism with a thriving alternative… are rather slim.”