Sub-Saharan Africa may be one of the fastest growing regions in the world, but few African economies are expanding in a way that will lead to sustainable, widespread prosperity, according to the World Economic Forum’s (WEF) latest ranking of countries by a wide measure of productivity.

In the annual global competitiveness list (pdf), released this week, 15 out of the 20 lowest ranked economies were in sub-Saharan Africa. Only three countries—Mauritius, South Africa, and Rwanda—were ranked above 70th place, out of 140 countries. The index looks at factors including progress on infrastructure, financial markets, ease of doing business, and technological gains.

The region averaged over 5% yearly growth over the past 15 years, but much of that has been driven by selling off its natural resources—Africa is home to a third of the world’s minerals as well as a tenth of its oil. So far, this kind of growth hasn’t translated into a healthier, more educated work force, better productivity, or more reliable government institutions—all factors that affect an economy’s competitiveness, according to the WEF.

It isn’t all bad news. The region is still expected to expand 4.2% this year and commodities are playing less of a role in some of its largest economies, like Nigeria, where services now account for 60% of GDP. Mauritius ranks 28th on the World Bank’s ranking of countries according to ease of doing business there, which also noted that no region had done more to improve regulation than sub-Saharan Africa. 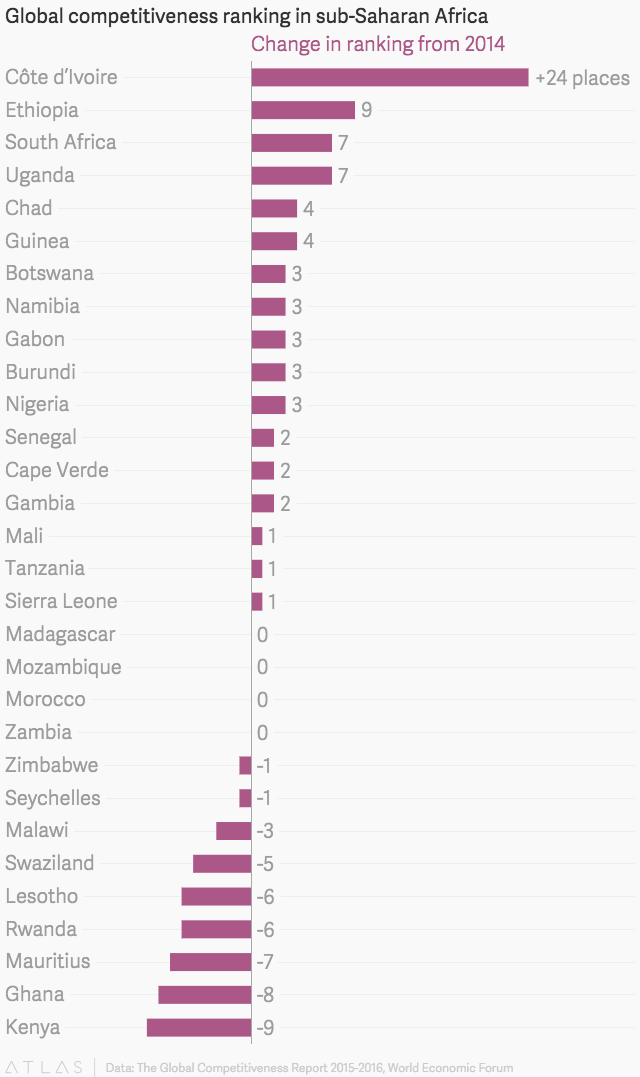 Here is how the rankings look across the continent.