In Africa, there are a little under 5,000 cars for every 100,000 people. In Europe, the number is about 48,000. Yet, the number of deaths as a result of road accidents in Africa is almost three times higher than in Europe, data from the World Health Organization (WHO) show.

There are a slew of reasons why. Chief among them is a lackadaisical attitude towards traffic law enforcement, a lack of decent roads—and sidewalks for that matter. Emergency healthcare is also poor, which means you’re less likely to survive serious injury.

Most of the fatalities, unsurprisingly, involve car owners. But a significant number of those killed in road accidents are pedestrians.

With a growing consumer class on the continent, the sale of cars—the ultimate middle class status symbol—is expected to increase as well. And if there’s no serious effort to better enforce traffic laws or improve roads, more car owners will simply mean more accidents on the roads.

That is exactly what happened in countries that saw more people use motorcycles. The WHO report shows that in Tanzania, for example, registered motorcycle users went up from 46% to 54% over the last three years. Motorcycle-related deaths also rose “from 13% to 22% of [Tanzania’s] total number of road traffic deaths.”

Overall, Libya is the deadliest country for road accidents, while Seychelles boasts one of the safest records on the continent. 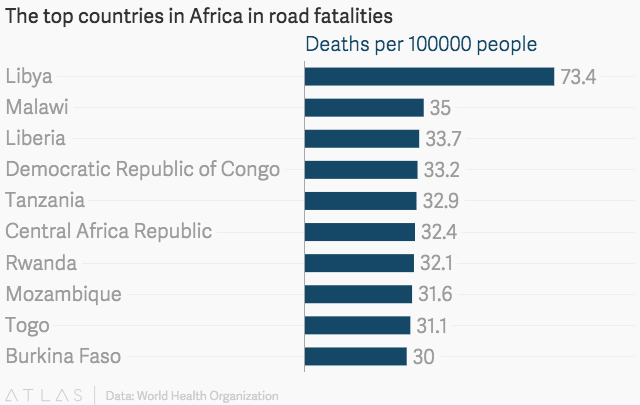