Over the last five years, Africa has seen the highest rate of population growth at about 2.5% annually and by 2050 a quarter of the world’s population will be on the continent.

Put another way, of the 2.4 billion new people on the planet by 2050, 1.3 billion of them will come from the continent, based on data from the UN World Population Prospects (pdf).

The increase in population, which will also be accompanied by lower mortality rates, presents the continent with an enormous opportunity, similar to the one experienced by East Asia in the second half of the twentieth century. The so-called demographic dividend is now upon Africa as well, economists say. By 2050 ten of the youngest countries in the world will be found on the continent.

The new working-age population such an explosion will generate could to lead to a 11% to 15% GDP growth on the continent, World Bank analysts argue. This is the same as doubling the current rate of growth in the region.

The poverty reduction that will accompany this growth will be transformative. The poverty rate, taken to be those living under $1.25 a day, which in 2007 made up about 52% of Africans, could fall by 17% by 2030, constituting up to 60 million less poor people.

But the question remains, will African countries be able to leverage this opportunity? The growing workforce bulge will need to be met with jobs so as to generate the kind of wealth that can fuel this kind of economic growth. At the moment, evidence suggests the continent has struggled in this regard. As Quartz has reported before, in the last 23 years, for example, youth labor participation in Africa has been negligible. The continent has struggled to create jobs in particular for the most educated of its young people. 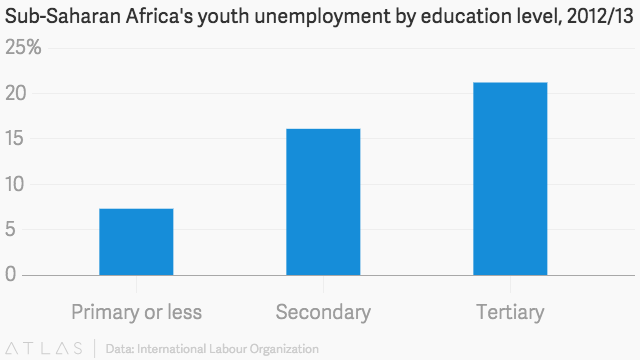 Overall, between 2000-2007, the working age population in Africa grew at 2.6% annually creating 96 million working-age people along the way. But during that time, only 63 million jobs were created. That’s a significant gap. Additionally, there are 10 to 12 million young people entering the job market annually. But they are faced with a private sector that is too small to absorb them, analysts point out. The region has seen some of the highest rates of investment recently. But, there are still doubts that the region can generate enough jobs to meet the growing population surge. It doesn’t help, also, that the continent is one of the toughest places to do business which makes it even harder for a robust private sector to emerge that can absorb the growing labor force.

But the potential is there. To meet it, African countries need to create the conditions for it to be realized. First, create better incentives for the private sector to flourish so it can create the much needed jobs. Second, deepen investment in a skilled workforce that can take over these jobs. Projections suggest that education could be that silver bullet for the continent. ”In a scenario where educational attainment is assumed to improve, such that the skill share of Africa’s labor supply doubles by 2030, Africa’s poverty rate could be as low as 13%,” the World Bank says.

This post has been corrected. An earlier chart on global population projections had an incorrect figure. That chart has now been updated.