The drama that has enveloped Africa’s second-largest economy over the past week shows no signs of letting up.

In an embarrassing reversal, South African president Jacob Zuma replaced his controversial choice for new finance minister David van Rooyen on Sunday (Dec. 13), barely a week after appointing him, and instead tapped Pravin Gordhan (pictured above), the current minister of cooperative governance, to take over.

Unlike van Rooyen, Gordhan comes to the position with significant experience—he served as finance chief from 2009 to 2014. He was succeeded by Nhlanhla Nene, who was abruptly fired last week in favor of the inexperienced van Rooyen. Van Rooyen will now swap with Gordhan, becoming minister of cooperative governance.

“It’s absolutely shambolic,” John Ashbourne, Africa economist at London-based Capital Economics, tells Quartz. “On the plus side, Gordhan is known as a safe pair of hands, and this will be comforting. But on the other, this second reshuffle in five days will really confirm the impression that president Zuma has blundered into a self-inflicted crisis.”

The abrupt dismissal of Nene led to intense criticism of Zuma’s management style and spooked investors. The rand fell steeply against the dollar and the benchmark stock index at the Johannesburg exchange shed close to $11 billion in a matter of days.

During his time as finance chief, Gordhan was seen as a fiscal conservative, a helpful reputation at a time when the markets are nervous about South Africa’s debt and spending levels. Yesterday, the news of Gordhan’s reappointment was accompanied by a 5% jump in the rand against the dollar. Local stocks are also rallying today: 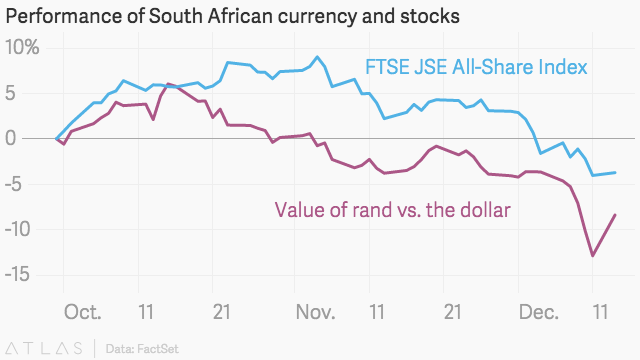 Zuma explained his change of heart as a sign of democracy in action.

“I have received many representations to reconsider my decision,” he said in a statement. “As a democratic government, we emphasize the importance of listening to the people and to respond to their views. In this regard, I have, after serious consideration and reflection.”

But reports suggest that the initial decision to sack Nene was made by Zuma with little input from his cabinet or other party officials. Jeff Radebe, a minister in the president’s office, said Zuma did not inform his fellow ministers that he was thinking about making a change until just before Nene was sacked.

“Speaking for myself, I don’t think cabinet had any idea that there was going to be a reshuffle,” Radebe told reporters last week.

While the appointment of Gordhan may calm the markets and reassure nervous investors in the short-term, the damage to Zuma’s reputation may be permanent. With a little over a year left on his ANC presidency, such a high-profile reversal suggests a waning influence within the ruling party.

“Zuma being forced into such a public climb-down would seem to show that factions within the ANC have been able to bring the president to heel,” Ashbourne says.

Already, there is speculation that the president’s erratic behavior could lead to him being “recalled” in a similar manner to his predecessor, Thabo Mbeki. Half of ANC supporters said they trust Zuma ”just a little” or “not at all” in a recent poll (pdf).

“This is not about Gordhan or Van Rooyen or Nene, it’s about Zuma,” Dawie Roodt, chief economist at Pretoria-based Efficient Group, told Bloomberg. “I can’t see how Zuma can politically survive much longer under these circumstances.”