By all accounts, president Jacob Zuma’s decision to change his finance minister twice in the space of a week rattled investors. While the reappointment of Pravin Gordhan has calmed the markets for now, Zuma’s unpredictable behavior continues to impact negatively on Africa’s second largest economy.

“Zuma’s Treasury reshuffles will be remembered as one of the biggest and economically devastating political blunders of the post-apartheid era,” Anne Frühauf, senior vice president of the consultancy Teneo Intelligence, wrote in a note to investors.

This week has seen Moody, the ratings agency, follow Fitch and Standard and Poor’s (S&P) in downgrading its outlook for the country to negative. Political interference over economic decisions was one of the reasons they gave for the change.

“The second driver for the negative outlook is the risk that public spending restraint will weaken in the face of political pressures while revenues underperform in the context of a prolonged period of sub-par growth,” the agency said in a statement.

Meanwhile, Barclays, which boasts almost a century of working in Africa, is reportedly rethinking its operations in the region. Jes Staley, the bank’s new chief executive, is questioning the fitness of its Africa operations within its overall business, reports the Financial Times.

Profits from the bank’s Africa operations are down almost 2% for the year from the bank’s 11% target. This is partly due to market convulsions in South Africa, where its operations, under a separate outfit known as Barclays Africa Group Limited (BAGL), are listed on the Johannesburg’s Stock Exchange (JSE). 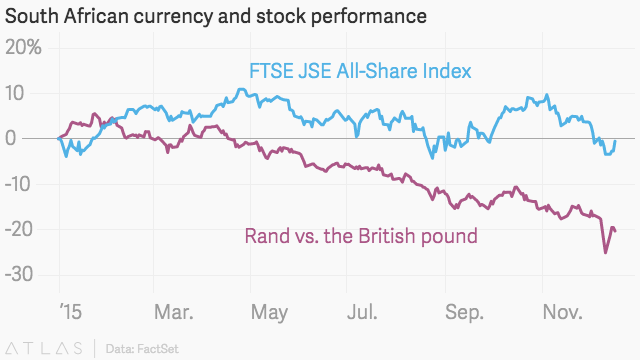 Zuma’s abrupt firing of his finance minister last week and the appointment of an unknown lawmaker, have contributed to an air of uncertainty and a decline in investor confidence. The JSE All Share Index lost nearly $11 billion in value in the two days following the news.

Meanwhile, the rand has been down almost 25% against the pound for the year. All this may have precipitated the rethink of Barclays’ Africa operation, the FT report suggests. While the bank is unlikely to pull out of the continent immediately, analysts say, it could sell off of its retail operations in South Africa, Kenya, Mauritius, Botswana and Zambia.

All the while, the pressure on Zuma promises to only get worse. While the ruling party ANC has publicly shown its support for the embattled president, the question is how long this will last.

On Wednesday, thousands of citizens protested across South Africa demanding Zuma be sacked. And with the municipal elections scheduled for next year, the question is whether the ANC is prepared to head to the polls with such an unpopular figure as its leader. All this uncertainty isn’t going to help imbue investors with any confidence that Africa’s most developed economy has its house in order.