Roch Marc Christian Kaboré, a former banker and one-time prime minister, was sworn in as Burkina Faso’s new president on Tuesday (Dec. 29), the first time that the country has had an electoral transfer of power in almost three decades. Kabore won over 53% of the vote in an election held last month, defeating former finance minister Zephirin Diabre.

The event caps a tumultuous year for Burkina Faso.

It began with the ousting of long-time leader Blaise Compaoré, who was forced out of office by a popular uprising that opposed his efforts to change the constitution so he could stay on in power. The transitional government formed after his departure faced its own crisis after it was overthrown in September by a section of the military loyal to Compaoré. But the army quickly thwarted the coup and restored the interim administration.

While Kaboré’s election does usher a new dawn for Burkina Faso, he is not a complete break from the past. He served in Compaoré’s previous administrations as minister in various capacities, and was the country’s prime minister for two years in the mid-1990s. He was the former ruler’s special adviser before he broke ranks following Compaoré declared intentions to stay on in power. Kaboré is only the third civilian president of Burkina Faso of the nine rulers it has had since the country’s independence from the French in 1960. (The other leaders came to power through coups).

He inherits an economy that is highly dependent on commodities, and has experienced a weakening as a result of the global economic slowdown and political instability of the past twelve months. 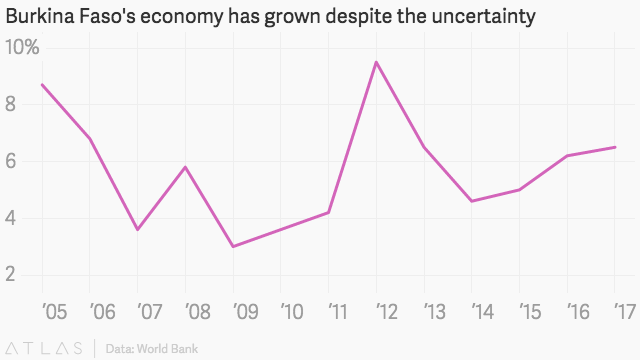 Kaboré’s ascendance to power should restore confidence, especially with the private sector that has taken a wait-and-see approach over to investment, wanting more clarity about the country’s political situation.