Lifting the restrictions will do little to close the wide margin between the official exchange rate 199 naira to the one dollar and the parallel market rate of 260 naira as the parallel market continues to thrive. The bank has blamed this on foreign exchange dealers and announced it will stop selling dollars to them, forcing bureau de change operators to source foreign exchange from autonomous sources. The lifting of restrictions should ease the pressures on the market but frustrations remain that the Central Bank is putting off a devaluation of its currency. 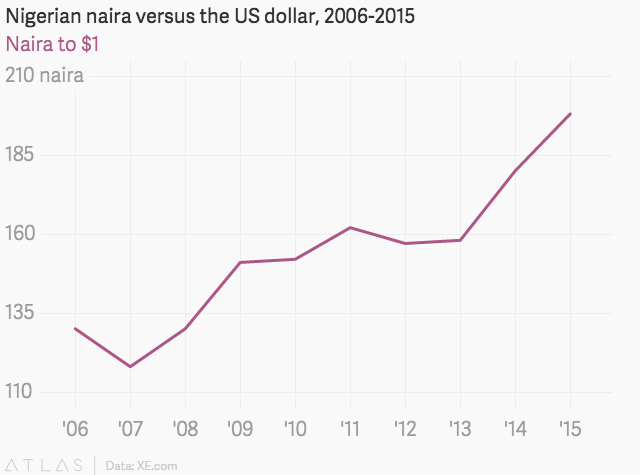 “While the CBN has defended its latest move as yet another measure against what it sees as persistent speculative attacks on the naira, many are likely to take a cynical view on this, viewing it as yet another excuse by the central bank to avoid dealing with what is widely perceived to be an overvalued currency,” Manji Cheto, an analyst at Teneo Intelligence told Quartz.

The bank’s statement does not hint at an impending devaluation of the currency and Nigerian President Muhammadu Buhari stated during a media chat last month that a devaluation was not on the cards.

Still, there are faint hopes that, at the apex bank’s next monetary policy meeting (Jan. 25), could provide an chance to consider a devaluation. “Right now though, it seems like the CBN is willing to use all options available to it, even draconian ones—with devaluation viewed as an absolute last resort,” Cheto said.