The story of global headwinds slowing down Africa’s economic growth is not going away. If anything it is intensifying. The continent saw foreign direct investment (FDI) fall by a third to $38 billion in 2015, recent data from the UNCTAD, the body responsible for international trade. This decline is against the overall trend, where global flows of FDI rose by 36%, with developed economies such as the United States and the European Union showing a sharp increase. 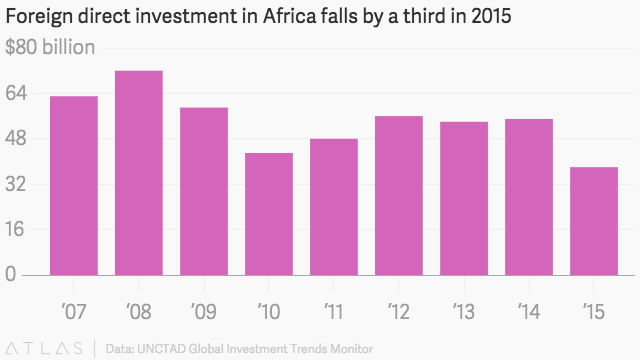 And UNCTAD’s report suggests that things could’ve been worse for the continent but for a rebound of sorts in North Africa helped by Egypt’s return as an investment attraction. The country saw FDI jump from $4.3 billion in 2014 to $6.7 billion in 2015.

“That’s a very bad sign for the region,” John Ashbourne, Africa economist at London-based Capital Economics, tells Quartz. “Yet more evidence that investor sentiment towards Africa really soured over the past year.”

Fundamentally, the global decline in the demand for commodities has hit the continent hard, as it was a significant source of FDI inflows for a lot of African countries. This has given international investors a pause, shelving expansion plans at a time of weak prices. “In some countries, notably Zambia, mining firms actually reduced production,” Ashbourne says.

Of particular concern is the performance of some of the bigger economies on the continent–Nigeria, South Africa and Angola. Nigeria, the continent’s largest economy, saw its FDI drop to $3.4 billion, a decline of 27% from the year before. The steep decline in oil prices contributed significantly to that sharp decrease in the amount of FDI generated. Meanwhile, in South Africa, the continent’s most advanced economy, FDI was down by 74% to US$1.5 billion.

“Those three make up around two thirds of the region’s economy, so their performance really drives investors’ perceptions of the continent as a whole,” Ashbourne points out.

While last year was difficult, it was not all gloomy. Cross-border mergers and acquisitions were up significantly, from $5 billion in 2014 to $20 billion this year. 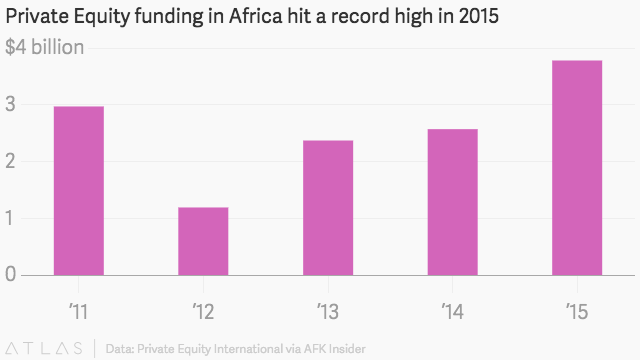